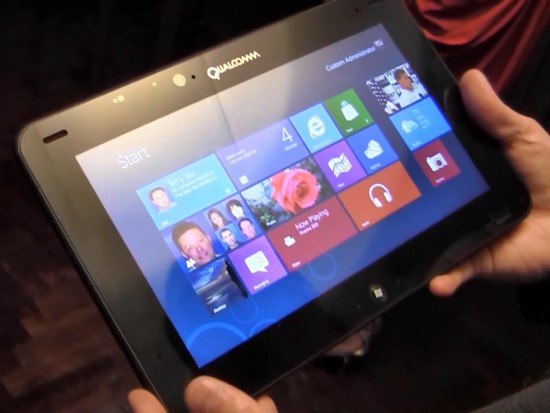 Boy, don’t you just love reference designs? They predict the future of full fledged devices, such as tablets and smartphones. At Computex 2012 Qualcomm brought a Windows 8 RT ARM tablet, a reference design with Microsoft’s latest OS, that’s shown in action below.

Qualcomm is a big supplier of ARM platforms for the tablets based on this processing solution and running Windows 8, called Windows RT in this case. At Computex Taipei, Qualcomm brought a 10.1 inch tablet with a Snapdragon S4 MSM8960 dual core processor, used as basis for Windows tablets. The device comes with a card reader, high resolution cameras and all sorts of sensors. The video below is one of the few occasions where we get to see Windows RT in action on an ARM processor and maybe compare it to what we’ve seen on the Intel-based counterparts.

The Qualcomm spokesperson even demoed a game with 3D graphics, Vendetta Online, that’s coming soon to RT tablets. The game is shown as running in the background without issues, while the use checks out the calendar app or opens up other Metro UI applications. I can’t say I feel any lag on the Qualcomm tablet, compared to the many Intel-based ones. The game looks nice and multitasking is a breeze! More details in the video:

Yes, There are Cheap Windows 8 Tablets With Keyboards Out There:...