The tablet market is evolving, but at the cost of lost market share for some of the big players. Apple is the one losing the most, at least in Q3, according to the latest figures from IDC.

In Q3 this year the tablet market reached 47.6 million units shipped worldwide, up from 34.8 million in the same quarter last year. Apple’s iPad is still number one, with 29.6% in market share, followed pretty close by Samsung, with 20.4%, after a pretty big growth. Third place is ASUS, with 7.4%, then Lenovo with 4.8% and Acer with 2.5%. 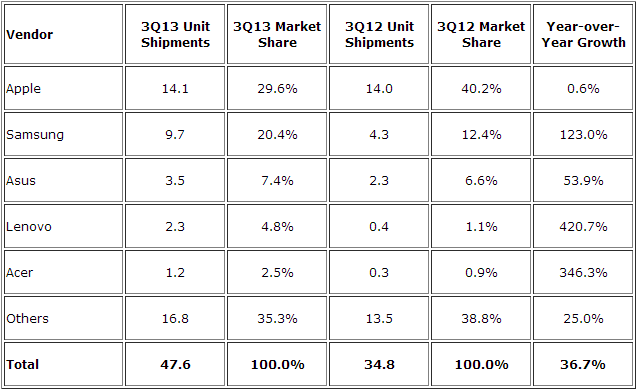 Amazon fell out of the top 5 list in Q3, even though they just launched new tablets weeks ago. IDC’s estimates show that the tablet market has grown 36.7% year over year, so the iPad’s loss in share was Android’s gain. Windows or Microsoft slates aren’t even mentioned here, apparently and in case you want more numbers, know that Apple shipped 14.1 million tablets in the quarter, while Samsung moved 9.7 million units.

ASUS shipped 3.5 mil especially thanks to the Nexus 7 and Lenovo shipped 2.3 million.