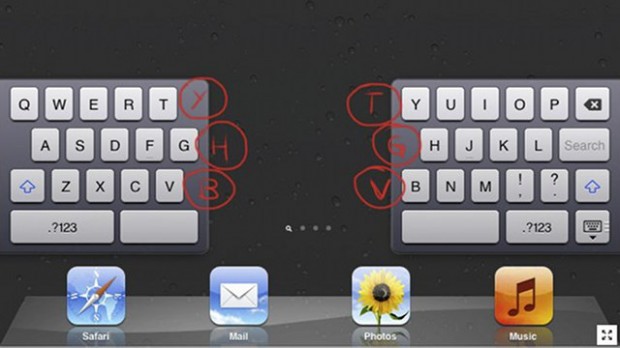 The iPad’s split keyboard has been the topic of discussions for a while now, with some users saying it’s very comfortable to use, while other find it too unusual for their taste. Now, it appears there’s an extra function that we didn’t know about, making the input method even more flexible. I’m referring to some hidden keys that are made available if you tap in the blank area right next to each half of the keyboard and you’ll see the letters from the other side’s edge appearing.

These hidden keys allow people typing on the Apple tablet add 3 more letters to their thumb input. The split keyboard on the iPad was invented to allow people to type with their thumbs while holding the tablet as one would during a gaming sessions for example, with the thumbs available for input and the rest of the hand supporting the device. Apple didn’t even document the hidden keys anywhere and most of the iOS 5 uses never knew they had this nifty function available.

These keys don’t just appear when you’re using the standard letter layout, but they also remain available when switching to numbers and special characters. Honestly, this doesn’t impress me one bit, after seeing the various keyboard options that Android users have, including some very popular Swype input methods. The hidden keys aren’t much of an addition, but they’re certainly not a flaw, either.

iPad 3 Launching In the Next 3-4 Months?