Wikipad has decided to branch out into other segments, so after launching an Android tablet can be turned into a gaming console by sliding into a dock, now they’re making iPad accessories. An example is the brand new iPad Mini dock shown below. The name is Gamevice and it seems like a pretty big gadget.

Wikipad Gamevice gives the iPad Mini analog sticks, buttons and a D Pad, with two special pads attached to the sides of the device. Wikipad intends to launch the Gamevice just in time for the holiday season and apparently there will be two versions of the product, both designed for the 7.9 inch iPads. One of them will also include a small battery for the controller, while the other will also act as an external battery pack for the tablet.

Most iOS games were designed with touch controls in mind, but the number of third party gaming accessories for iPad, iPod Touch and iPhones is growing and developers are also adding support for them. The Gamevice should also work with those special games. No idea how much this will cost, but it would make a fine Xmas present. 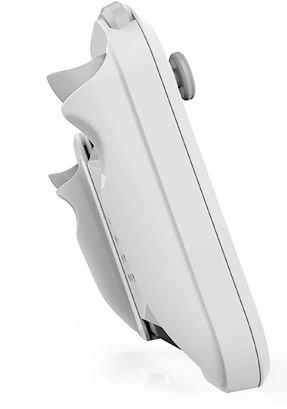