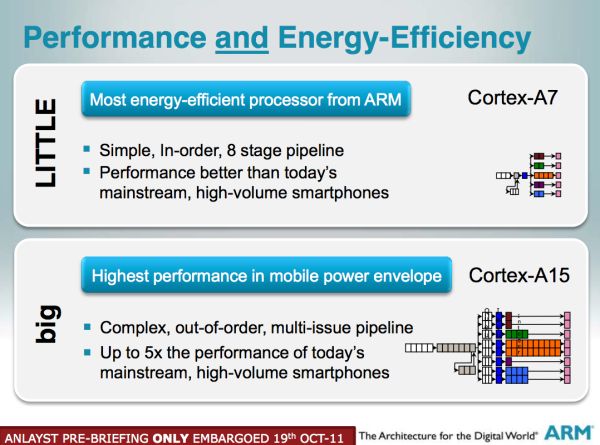 Samsung has been quickly rolling out the latest two generations of chipsets, the Exynos 4 Quad and Exynos 5 dual. Now they’re ready to take it up a notch, with an 8 core processor, if recent rumors are to be believed. There will be a company presentation going on on February 19th, that will showcase a brand new 8 core processor, that relies on ARM tech.

The ARM technology involved here is big.LITTLE computing, meaning that a half of the 8 core chipset is a quad core  1.8 GHZ ARM Cortex A15, while the other is a quad 1.2GHz Cortex A7. The first takes on the heavy workload, while the second is all about the standby and mundane features, kind of like Tegra 3’s fifth lower frequency core. All that’s known about the chip is that it will involve the 28 nm manufacturing process. We also know it will be included on future smartphones and tablets, but don’t expect to see it on the Galaxy S4 or the next flagship Galaxy Tab.

Samsung has still to push the dual core ARM Cortex A15 Exynos and take advantage of its potential before the 8 core chip arrives. However, I guess that by fall 2013 enough time will have passed for Sammy to show us a Galaxy Note III with a crazy 8 core heart, that will even demolish the Call of Duty playing PC you have now on your desk.