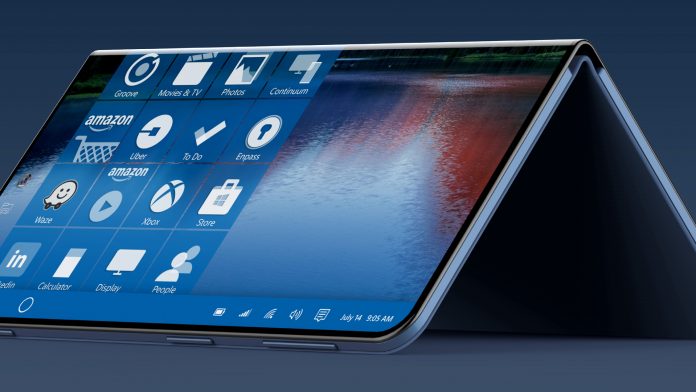 Remember the Microsoft Courier? The ill fated tablet/e-reader got canned in 2012, back when such a foldable machine could have ruled the market. The iPad was still young and prone to get beaten, but Steve Ballmer couldn’t see it. Fast forward to 2018 and the Courier may have just inspired the Surface Phone/Andromeda. Hints were dropped during a recent conference.

We’ve seen ridiculous leaks over the past year, with crazy hinges patented, as well as 3 display devices. Microsoft is really trying to come up with something special, even though proof is seldom found about the device. The Redmond giant held the BUILD 2018 conference earlier this month and during it there was a moment when Microsoft designer Jon Friedman briefly discussed the Courier and its cancellation.

Why would he bring it up, except to make it come to life, right? The Courier was ahead of its time, with two displays, the ability to fold in and out, but Windows 8 or Windows Phone 8 couldn’t cope with it back then. The device came with stylus support, which made it ideal for note taking, so that’s another bummer. The fact that people at Microsoft are still talking about a project from 6 years ago means that they really saw something special in it.

The Surface Phone/Andromeda may draw heavy inspiration from that device, this time with Windows 10 on board. The latest rumors say that the Surface Phone could end up running a full version of Windows 10, making it fully compatible with the Microsoft OS and accessories. We still don’t know when it will come, but IFA 2018 feels like a safe bet. You know what would be nice? Snapdragon 845 on board and Windows 10 S with a huge battery life.