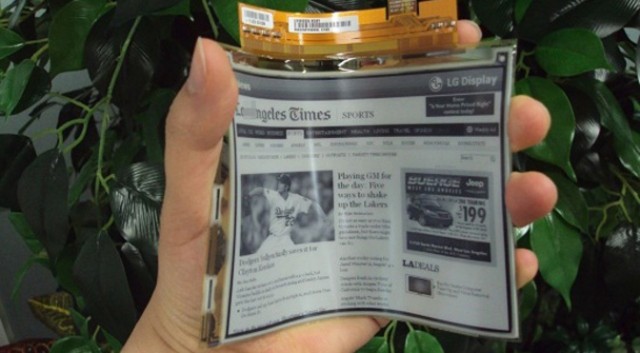 The idea of flexible displays has been tackled by Sony and Samsung before and there’s even a video below, demoing Samsung’s achievement in this field. However, it’s LG that’s making huge leaps these days, having just started mass production of its first flexible, plastic E-Ink displays. The resulting devices could finally put a dent in the iPad’s domination on the tablet market.

The new LG display technology is the opposite of the hard and heavy glass laminate E-Ink displays found on the likes of the Kindle Fore and Nook Tablet. The new plastic screen has a resolution of 1024 x 768 pixels and it measures 6 inches in diagonal, so it will be perfect for a smartablet like the Optimus Vu, but a bit larger. The LG screen is half the weight and 30% thinner than a similar glass e-ink pane. It weighs 14 grams and it’s 0.7mm thick, so this is quite an achievement. LG also promises a lot of resilience for its screen and says that the plastic display survives repeated 1.5 meter drop tests and break/scratch tests with a small hammer.

Flexibility is available up to 40 degrees from the mid point. LG uses here a conventional TFT process and it’s possible that they’re basing production on the Electronics on Plastic by Laser Release technology. This is a technique of embedding eletrophoretic ink capsules in a plastic substrate, that can be done with current technologies. The appeal here is that E-Ink displays are cheap to make and can run for months on a small battery. Mind you that flexible OLED displays have been available for a while, but the E Ink ones seem more efficient.

If you want a sample of what a flexible OLED screen can do, you have the video below and the advantage here is perfect viewing angels, plus vivid colours and good luminance: