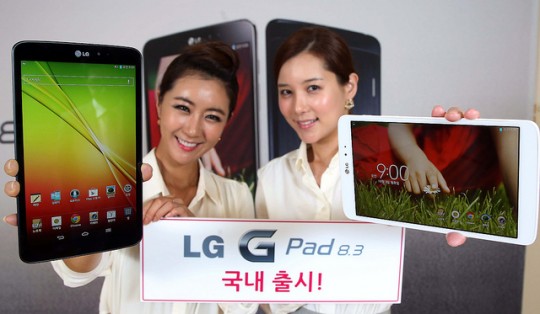 LG has just confirmed the availability of its first tablet in 2 years, the G Pad 8.3. This device will be available in Korea in a week and international markets will get it before the year is out.

This model was unveiled at IFA 2013 last month and it’s supposed to be a premium slate with a midrange cost. This “G” series product packs an 8.3 inch Full HD display, a 1.7 GHz quad core Qualcomm Snapdragon 600 CPU and incorporates some of the features of the premium smartphone LG G2. Those include the Knock-on lock/unlock method and the Q Slide multitasking feature.

The G Pad includes a function called Q Pair, that pairs an Android smartphone with the tablet for network tethering and share notifications. You can answer calls or texts from the handset on the tablet, which is pretty cool. The LG G Pad 8.3 will come in white and black and it will be available starting October 14 for 550k won, which is around $510.