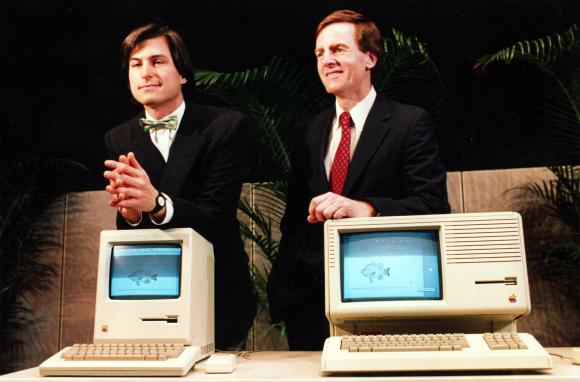 If I remember well, having seen my share of Steve Jobs biography documentaries, John Sculley was brought by young and visionary Steve Jobs to Apple in order to be its mature CEO. That happened back in 1983 and Sculley had been president of PepsiCo before leading Apple… Now Sculley is still around, 72 years old and ready to share his insight on Apple. He even detailed the Galaxy Tab affair in a recent interview with Economic Times.

The famous phrase “Do you want to sell sugar water for the rest of your life, or do you want to come with me and change the world”, was said by Steve Jobs 30 years ago to John Sculley. He did that to convince the man to join him at Apple, lead the company and leave Pepsi behind. Sculley is saying now that he still sees Apple as part of his life, as he uses the iPad, MacBook Air and the iPhone. In the interview with Economic Times he said that he predicts many good years ahead for Apple and that the only serious rival at this time is the Samsung Galaxy Tab.

He also praises the “extraordinary executive team” at Apple and mentions that Sony is trying to deal with challenged of the legacy business right now. Sculley also sees Sony as losing money on the television unit, while Apple isn’t bleeding any funds right now, so while Jobs always saw Sony as an inspiration, the student surpassed the mentor this time. In the end of the interview, the former Apple CEO says that although everyone doesn’t see Nokia and Microsoft as serious competitors in the smartphone market, they might surprise the industry with great low end smartphones.

What do you make of the words of a former main man at Apple? Is he right about the good years of Apple or is the Cupertino giant going down?