Samsung received a fresh patent this week, one that involves the usual folding tablet, but this time with a twist: a physical keyboard. We’ve seen multiple foldable devices patented by Samsung, some linked to the Samsung Galaxy X project, others not. But the keyboard is a new approach….

Sammy already has a multi fold patent under its belt ever since September 2016. This time it gets a patent for a next gen device, that folds its keyboard below the screen part, at the back side of one of the folding panels. Samsung has yet to launch a proper foldable device, even though they’ve been exploring the segment ever since the Youm prototype at CES, more than 4 years ago. 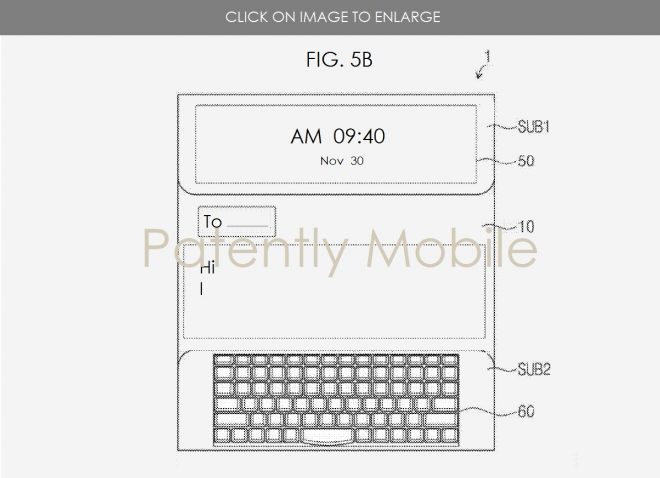 To me this looks more like a MID, a small Vaio, or something like that, not exactly a futuristic machine. You could get more use out of a tablet keyboard dock or a case with a keyboard integrated. Having a physical keyboard on a tablet, even if foldable doesn’t make much sense anymore, for ergonomical reasons, battery reasons and also for the sake of a pretty looking design.

It’s true that convertibles and detachables do have keyboards, but they aren’t the pinnacle or ergonomics or aesthetics. A touch keyboard makes more sense for foldables. Also, word through the grapevine says that Samsung is going to adopt a Snapdragon CPU on a future Windows on ARM device.