We’re recently played with the Samsung Galaxy Tab S5e and found it reasonably satisfying for a midrange device with an excellent screen, battery and speakers. Also, the crazy waistline… We take things a bit further now with the Samsung Galaxy Tab S6, which was announced on July 31st and reached stores in August. We have it here for testing purposes and we unboxed it below.

It’s priced at around $649 and it comes with a 10.5 inch Super AMOLED screen and a metal unibody design. In many ways it feels more akin to the Tab S5e rather than the Tab S4 direct predecessor. Inside its box we find a new stylus, this time bigger than the S Pen and also closer to the Apple Pencil. It has a magnetic section, that makes it stick to the tablet’s back in a special slot. 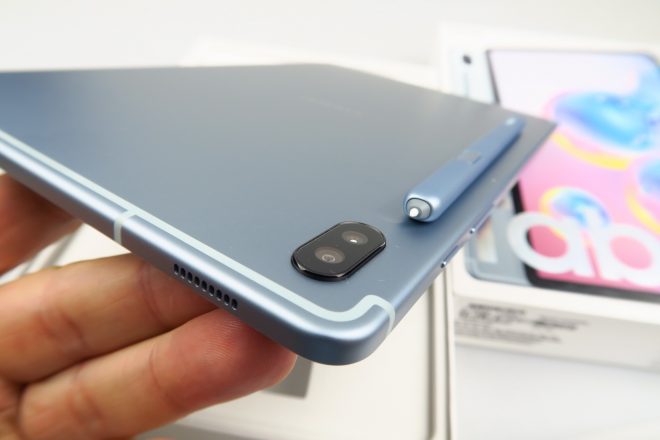 Inside the box of the device we find the metal key used to access slots, an USB-C cable, charger, manual and a small pair of pliers used to replace the pen nibs, plus spare nibs. The tablet itself feels very light, at 420 grams and also slim at 5.7 mm. It’s easy to wield even with a single hand and the bezels may seem thick, but they’re spaced well enough to fit your fingers on them. 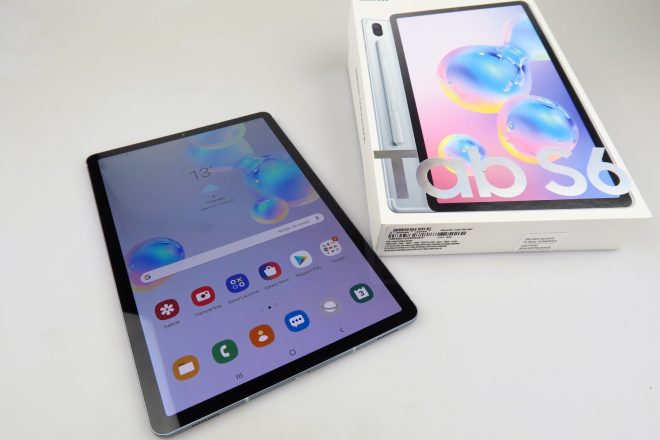 The device is available in colors like Mountain Gray, Cloud Blue and Rose Blush. We have the Cloud Blue version I guess, which looks pretty nifty and still premium. I’m not a big fan of the antenna cutouts at the top and bottom side, spoiling a bit of the design, but I guess we have no choice, for the sake of connectivity. Speaking of which, the Samsung Galaxy Tab S6 comes in 4G and WiFi versions.

Also it has 6 GB RAM/ 8 GB RAM versions and also 128 GB or 256 GB of storage, with a microSD card slot also in the mix. Inside it we find the powerful Snapdragon 855 processor, together with a 7050 mAh battery and upfront rests a screen similar to the Tab S5e one, a 10.5 inch Super AMOLED with a 2560 x 1600 pixel resolution. The difference is that it has a fingerprint scanner embedded within it. 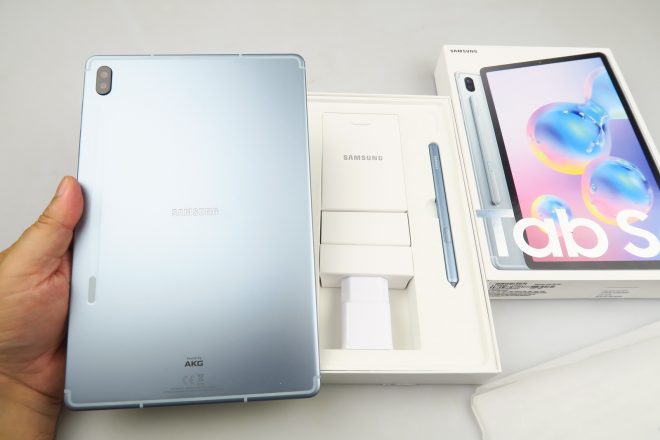 There’s also face recognition and 4 speakers tuned by AKG and with Dolby Atmos support. And the list of premieres continue, with a dual back camera, that includes a 13 MP main sensor and 5 MP ultra wide secondary cam. There’s Live Focus and 4K Video here, plus an 8 MP front shooter for Skype rather than selfies. We don’t have an audio jack but we do have Pogo connectors for the keyboard.

Also, there’s an USB-C Port, GPS, WiFi dual band, Bluetooth 5.0, DeX and 15W charge. We also have Android Pie with One UI and the DeX mode which feels closer to the Windows experience than the typical Android one. Bixby is also part of the package, activated by pressing the side Power button. To power off you now press the combo of Power + volume down. 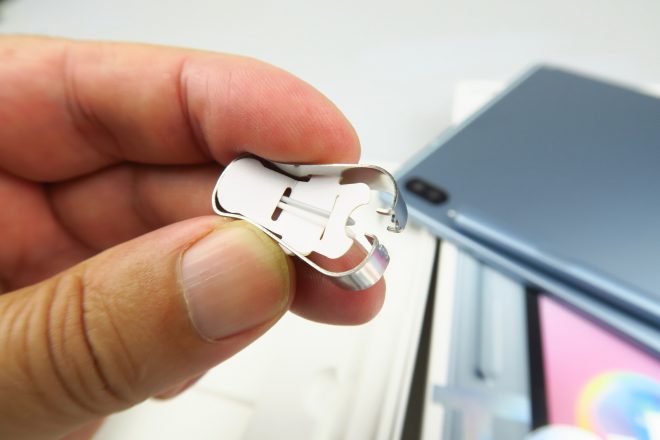 I should mention that the fingerprint scanner works quite fine, like the Galaxy S10 after the update I’d say. I also played around with the stylus and found it to be rather confortable, but also a bit slippery. There’s more to grip than the S Pen and it has more levels of pressure as far as I know. We’ll be back with a full review of this beast, but right now you can’t get a more powerful tablet for sure, at least with Android.