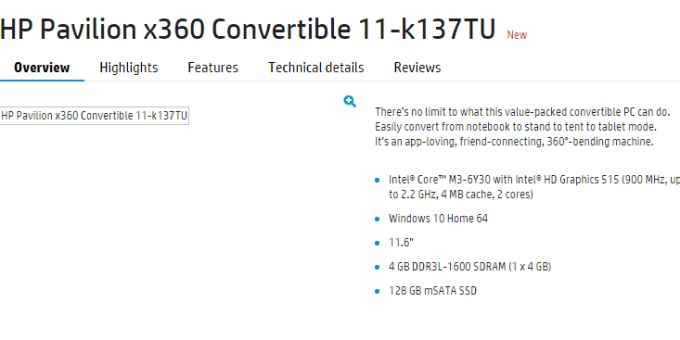 HP is preparing to bring a new Pavilion series convertible to the market, a model called x360 and packing a 11.6 inch screen. The device has been leaked and some of its specs have been confirmed, but we don’t have pictures yet. 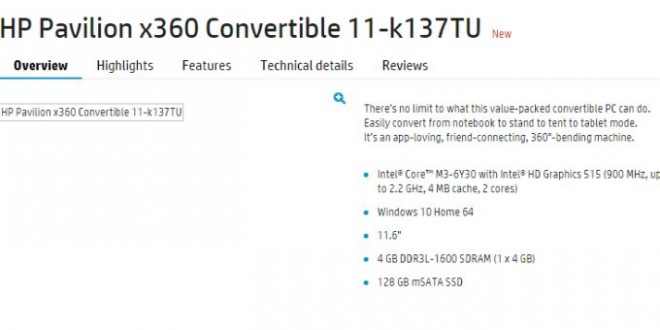 The Pavilion x360 line of convertible notebooks needed an update, although we’ve seen new models back in April. Those had Intel Braswell and Broadwell chipsets and now we’re getting Intel Skylake chips. The HP Pavilion x360 11-k135/k137 convertible is the newcomer here, with an Intel Core M3-6Y30 chipset, Intel HD 515 graphics and a fanless design.

This is a lower power chipset, that’s most likely aimed at replacing the Intel Core M-5Y10 in Intel’s lineup, but it has the advantage of using less power than a Core i3. The new Pavilion x360 has been listed on the HP Australia website, complete with Core M Skylake chip, 4 GB of RAM, 128 GB mSATA solid state drive and Bang & Olufsen speakers. There’s also an 11.6 inch 1366 x 768 pixel display on board, that can bend backward at 360 degrees.

HP’s Latest Envy All in One PC Has Alexa Built In,...