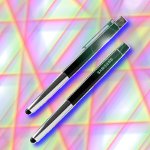 If you want more input and control over your Samsung Galaxy Tab unit there’s now a way to get it, through a new accessory. We’re talking about Samsung’s capacitive touchscreen stylus, known as the Conductive Pen, priced at $19.99.

This product works on the Galaxy Tab Android slates and any other tablet that relies on a capacitive touchscreen. This includes the iPad, Moto Xoom and HTC Flyer, that has its own beautiful stylus. Also, you might want to know tat the HTC Flyer has an active digitizer as an extra, allowing for more fine control with the special stylus.

Well, the Samsung stylus does not offer the same control and functionality for HTC Scribe, sadly. There’s also a drawback when it comes to the HTC Magic Pen: while it may be useful to draw, highlight and write on the scren, you can’t use it to tap on an icon or open an app. Will you choose Samsung’s pen?