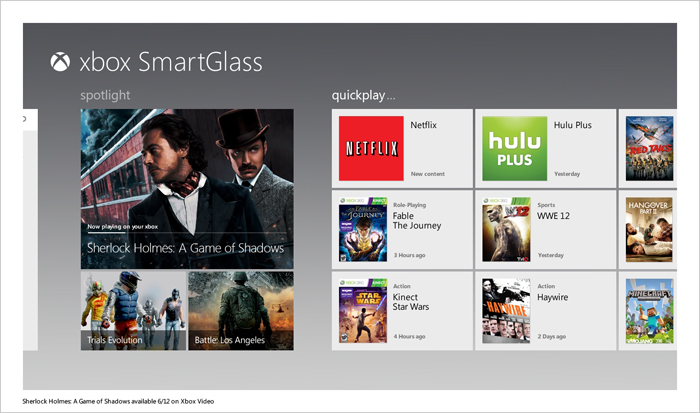 Microsoft just made some interesting announcements at E3 2012, including the one of the Xbox Music, a rebranded Zune and the Xbox SmartGlass. This is a companion app for tablets and smartphones, that will bring the Xbox experience to the mobile devices.

People compare Microsoft’s offering with Apple’s AirPlay or Nintendo’s Wii U, but it’s more than that. It’s a cross platform solution, that will work on Windows 8, Windows Phone, Android and iOS. As I said, this is the successor to the Xbox Companion app, that will make your tablet an extension for your TV. Thus, via SmartGlass you’ll be able to start playing games, playing videos or music or opening apps on your Xbox 360. You can also use the tablet/phone as a remote controller for the console, navigating the dashboard and browsing the web via IE.

SmartGlass also aims at turning portable devices into your “second screen”, so parts of the gameplay in some titles take place on tablets or smartphones. Imagine developing part of your tech in a strategy game on the tablet and then coming back to the joystick to move units around. How cool is that? TV show and movie watching will also be influenced, as you’ll get trivia info and details about what you’re watching on the phone/tablet and the ability to vote in live events will be included.