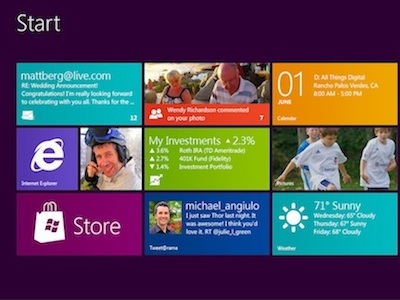 During the D9 conference taking place this week, Microsoft’s Steve Sinofsky (Windows section boss) unveiled a live demo of the Windows 8 platform. Supposed to make MS a really cool competitor in the tablet segment, the OS is practically two platforms in one: the standard desktop that resembles Win 7 and the full-screen browser UI with HTML5 and JavaScript apps.

The new OS is tentatively named Windows 8, although we can’t guarantee that the name will stay in the future. The new look of the platform can be considered the most substantial change of the OS in the almost 30 year of history of Windows. Based on touchscreen interaction, Win 8 borrows heavily from Windows Phone 7, maybe due to the involvement of the team behind the mobile OS in Win 8’s design.

The homescreen features a bunch of tiles, each leading to an app, just like in Windows Phone 7. Customization is also a key attribute of the OS and there’s even a “Store” mentioned in there somewhere. You can switch between apps by swiping from the left corner, while a swipe from the right brings up a menu bar.

Everything that was supported in Windows 7 (peripherals and such) will also run on the new OS. If you’re wondering about launch, we have no idea, although 2012 would be a good guess… maybe in summer? Finally, here’s a video demo of the fresh Windows: