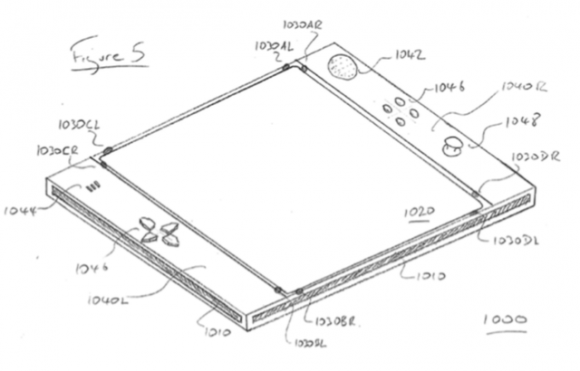 The EyePad is a brand new patent from Sony and from the looks of it this is either a gaming tablet or simply an original console. It may feel like a Nintendo DS that lacks a secondary display, but it’s also pretty interesting and its controls look nothing like the usual Sony buttons and analog sticks.

The device has the shape of a tablet, albeit a bit square-ish and supposedly is comes with the features of a gaming device. Supposedly, the device integrates a bunch of sensors and control modules, that will allow for a more accurate control. There was at some point a Sony camera system called the PS Eye/Eye Toy, sort of like a webcam slash Kinect precursor. Well, it was speculated for a long while that it would be cool if Microsoft included Kinect on a tablet or phone.

What if Sony decided to do that ahead of MS? Sony wouldn’t just throw the “Eye” branding out there without actually integrating a camera and array of sensors. This Sony Eyepad doesn’t quite feel like a 10 inch tablet, not even a 7 inch one in fact. For some reason it feels like a 5 or 6 accessory to the PlayStation 4 and we may learn more about it during the Sony February 20th event.