Blockchain is used nowadays everywhere, sometimes to boost the stock value of ice tea companies, other times to help make new digital currency. Now we learn it’s being used as part of a technology that enhances board games. It’s all happening via the PlayTable tablet console system.

The whole idea reminds me of the Skylanders games and it’s being developed by a San Francisco company. They see potential in the evolution of tabletop gaming. The firm is known simply as Blok.Party and they’ve created a way to use blockchain technology for board games. The PlayTable is the result, a hybrid of video game console and big diagonal tablet. Popular board games will be available on it, like Catan, Ticket to Ride and Texas Hold’ Em, plus a new game called Battlegrids.

The tablet is able to read information from the physical cards or game pieces and then the info is stored securely online. Every move or action you make with a piece or card is then recorded, which also means no cheating will happen. Pieces can level up as they travel and they can also change attributes, plus be traded by players. We’ve seen such features before, with Angry Birds action figures, Activision’s Skylanders, Nintendo’s Amiibo or the LEGO toys. 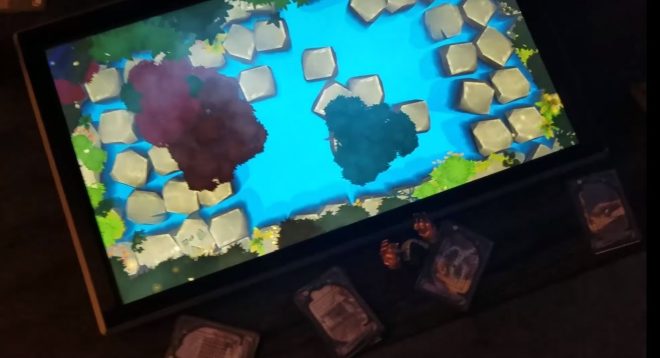 PlayTable also lets you use physical toys in digital games. It reads all the objects in proximity with a RFID sticker (radio frequency identification). You could even 3D print a piece if you want to, provided you have a sticker on it. Info is stored in blockchain, not on the tablet, so you can use it anywhere. The PlayTable is priced at $599, but early birds get it for as low as $349.

Expect a debut towards the year end.

Smach Z is a Handheld Gaming PC, That Relies on an AMD Ryzen V1605B CPU