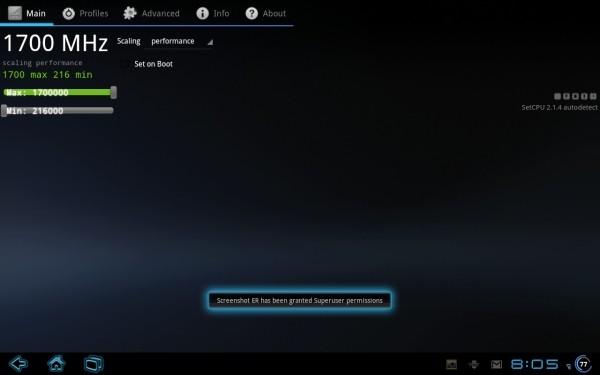 Motorola XOOM has been overclocked in the past, but now it hits a new range of performance, by getting at 1.7GHz clock speed. This doesn’t mean that the device’s problems are gone and its sales are going to explode, but rather that you can upgrade the performance of the slate, if you already own one.

Considered by some the “Nexus” of tablets, since it’s the first to run Honeycomb, the Xoom was also seen reaching 1.5GHz via overclocking in February. Last month, the process got to 1.6GHz and now we’re at 1.7GHz. The homebrew community seems rather fond of this tablet, since it’s good to work with on the latest version of Android.

Of course, this new clock speed doesn’t guarantee a stable environment and it seems the upgrade doesn’t apply to all Xoom flavors. If you manage to reach this CPU speed, you’ll also get results such as 70 MFLOPS in Linpack, 1480ms in SunSpider and Quadrant scores of almost 5000. Don’t try this at home kids, since it may void your warranty, drain battery life and cause instability issues.