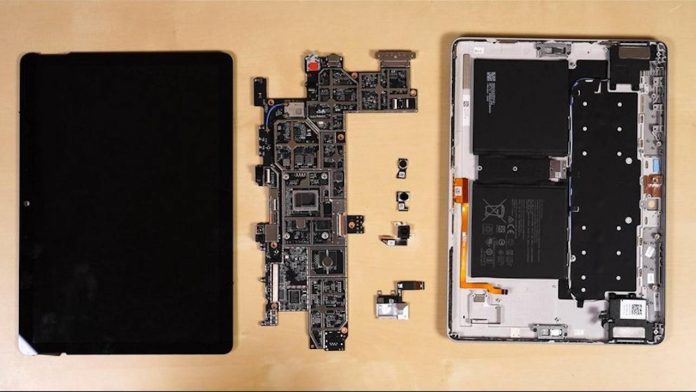 Just as a quick reminder, the first Surface Go obtained one of the lowest repairability scores from ifixit and some said it should have been zero out of 10. It was very hard to get started with the repair, parts were not modular and many parts got damaged during the replacement process. Basically, you were better off replacing the tablet with another device rather than fixing it. Back to the Surface Go 2, this device has a screen that’s now much easier to remove (heat and prying).

Screen repairs are thus more accessible and easier to pull off. The black shields that covered important parts are also more rigid, so they don’t get damaged permanently, increasing the reuse ratio. However, the final repairability score is still 3 out of 10, which is bad. Why? Well, there are many components soldered on, including the Surface Connector and USB-C port. The battery also resorts to a ton of glue instead of a pull tab.

Surface Go had a rating of 1 out of 10, while the successor goes up to a 3 out of 10. Another bummer is the lack of replaceable of expandable storage. On the good side of things, there’s only one type of screw used inside.