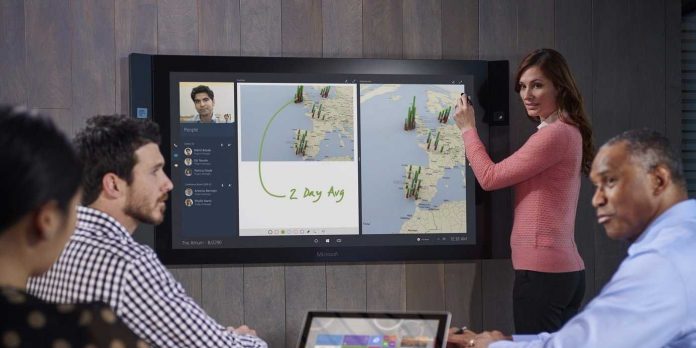 Does anyone remember the Microsoft Surface Hub? It’s a big digital whiteboard, meant to work with Office 365 in a corporate environment and in a conference room. Now it appears that the device is about to get a follow-up, a second version of the $22,000, since MS can’t cope with the large demand of the first one.

Big businesses, including half of the Fortune 100 club have rushed to get a Surface Hub, so the demand is much bigger than the supply. It’s been two years since Microsoft released the Surface Hub, a $22,000 Windows-based mega tablet meant for conference rooms and packing an 84 inch 4K touch display. The availability of the product has been pretty limited, though.

The second version has been confirmed by Microsoft in the meantime and the promise to share more info about V2 has been issued. It may come at BUILD 2018, or later. Some of the new features of the fresh product will also arrive on the older one via a software update. Surface Hub has been sold to over 5000 customers, making it the most popular home-built Surface hardware among big customers.

It can do teleconferencing, meetings, whiteboard tasks, OneNote, Skype, use several HD cameras or just mirror a desktop from a Windows 10 PC. Cisco and Google also offer digital whiteboard solutions, but Office 365 still has the best integration. Expect an improved screen, more RAM, a newer CPU and extra sensor arrays and cameras.

Microsoft Surface Studio Models Sold Out, including Priciest $4200 Model; A...