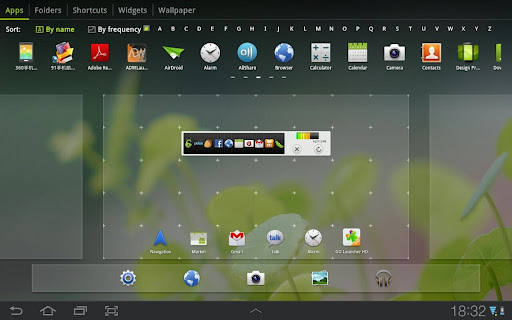 There are many custom launchers for Android smartphones out there, but when it comes to tablets, well… not so much. One of these launchers is GO Launcher HD, now available on Google Play Store and ready to hit your tablet. Honeycomb and Ice Cream Sandwich are supported here and in case you’re wondering, this launcher doesn’t work on phones.

The app is free to download on the Google Play Store and it comes with customizable home screens and animations, plus a new interface that allows you to add icons and widgets. There’s also a ton of settings and tweaks available and as far as the structure and layout goes, they’re pretty basic and keep with the look of Honeycomb/ICS. There’s a special section here for GO’s collection of free and paid widgets . There’s also an option for docked shortcuts along the bottom of the screen, that reminds me of the Samsung Galaxy Tab series feature.

The public’s reaction as far as this launcher goes is mixed, so although many are happy to see this option on Android tablets, users are reporting stability issues, which is expected considering it’s an early release. It’s version 1.01 right now and its problems includ widget incompatibilities and ICS-styles automatic folders.