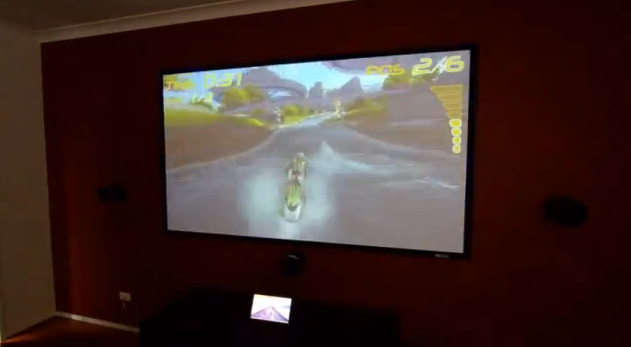 How about a bit of DIY to get the weekend started early? With recent rumors regarding an Xbox 720 console, one can’t help but think about Microsoft’s upcoming endeavor on the gaming side of things. This may include an Xbox tablet or… you can make your own, like the guy below did.

Aaron Toulmin connected his Surface RT tablet via HDMI to a 100 inch projector and played the famous benchmark-ish game Riptide on the huge diagonal using a wireless Xbox 360 controller. It doesn’t get more Xbox than that… The Surface RT has been criticized lately for being sluggish, but in this contraption it actually works just fine. The idea is to optimize games for the platform and the devs working with Tegra-based titles already have an upper hand.

I’m not sure if the combo Win RT + Tegra is as easy to work with as the Android + Tegra was, to be honest. Anyway, how’s this for an Xbox tablet? All that’s missing right now is some way to involve Kinect into this. Can you think of any way?