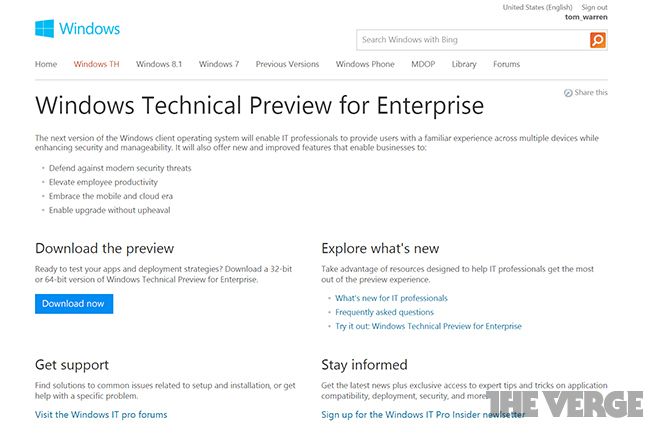 Microsoft is said to offer us the name of its new Windows release during the debut event on Tuesday, September 30. While it has been called Threshold for a while now, it may end up as Windows 9, just as it was leaked by a French Microsoft official, or it may be called something else altogether.

Today we found that Microsoft listed the name “Windows TH” accidentally on its Technical Preview for Enterprise site. They also detailed “the next version of the Windows client operating system”. Microsoft is expected to detail Windows Threshold on Tuesday, during an event in San Francisco, but the company is expected to release the OS in early October. The name Windows TH may not stick for long and Win 9 may be the final one.

Since there’s already a Technical Preview site, we may get to see the preview release next week, shortly after the event. We’ve got links for “What’s new for IT professionals”, but the pages haven’t been published yet. Windows TH will include a new Start Menu, with tiles, a notification center, a virtual desktop feature and UI changes. There will also be Cortana available with it and Microsoft will be launching a Windows Insider Preview Program, for IT professionals to provide feedback for the OS.