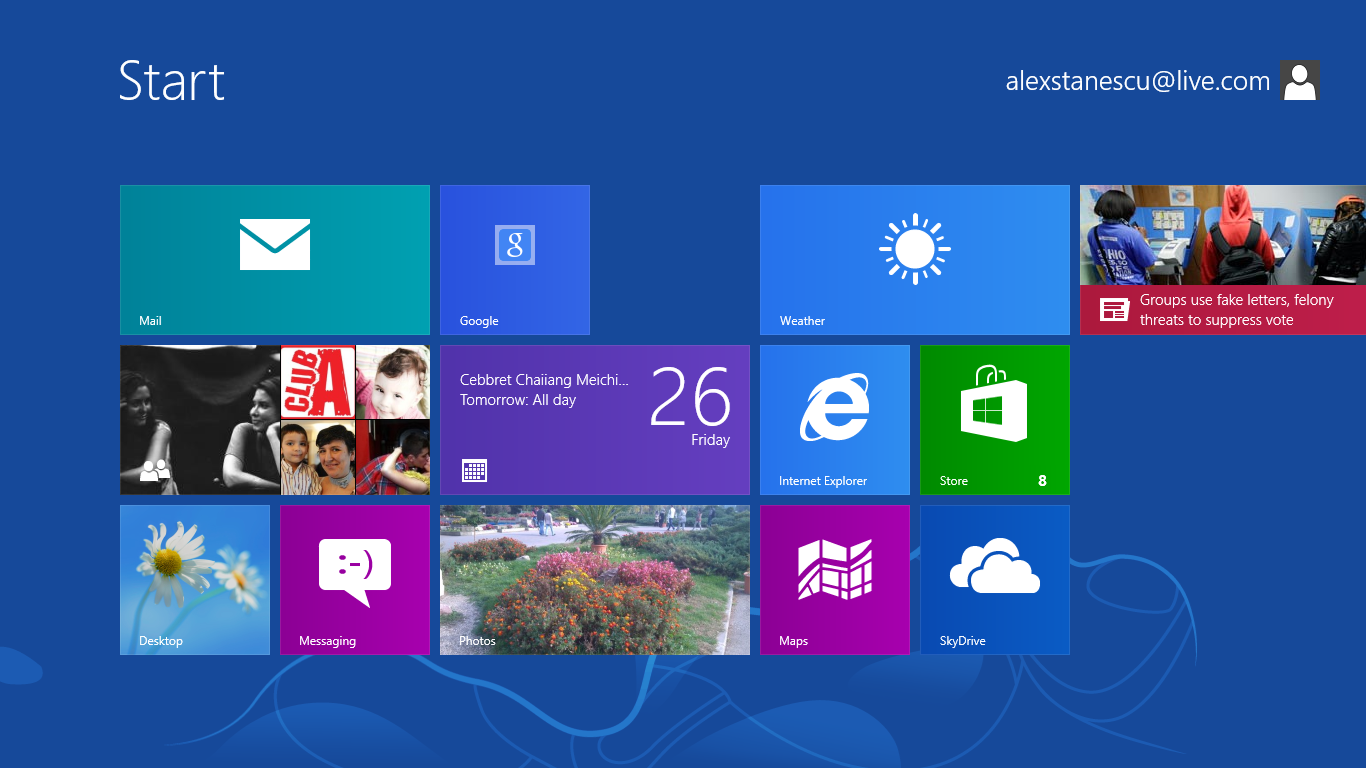 You probably know that we’ve already reviewed a Windows RT tablet, the ASUS Vivo Tab RT and now we’re having a look at the Windows RT platform on it. This is an operating system created by Microsoft as an ARM-based alternative for Windows 8, keeping the same Modern UI, but relying on a different architecture. ARM means that you get a slimmer device, with better battery management, but also the downside of developers not being so eager to port graphics intensive x86 games to this platform. 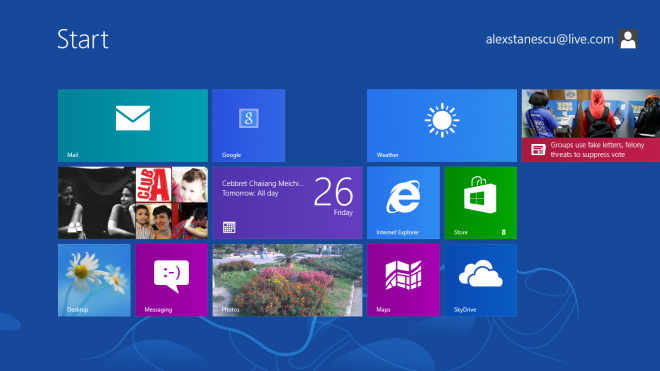 Rumors say that Halo 4 may arrive on this platform pretty soon actually, but we’ll find out more about that in the future. Windows RT is supposed to offer weeks of standby functioning thanks to a proprietary Connected Standby technology. It adopts the interface formerly known as Metro UI, now dubbed Modern UI, that relies on tiles arranged in a horizontal scrollable fashion. Those date from 2010, when Windows Phone 7 made them mainstream. Modern UI has a steep learning curve, especially if you’ve been using Android and iOS for a long while.

The browsing around the interface and the OS is done with swipe gestures from the sides of your device. There’s a touch controller on the sides of the slate measuring the start position of the swipe and its velocity, in case you’re wondering. There are 4 edge swipes with variations that interest us. There’s the simple swipe from the left, that allows you to alternate between full screen apps that are open at the same time. There’s also a shorter left side swipe that reveals a multitasking vertical window, with the apps running simultaneously listed vertically.

And then there’s a medium swipe that snaps one of the multitasking apps next to your main one and allows you to do two things at the same time, like use Skype with a friend and browse the web via IE 10. The right swipe brings up the Charms, a vertical bar that includes Search, Devices, Settings, Sharing and your Start Button. Search is performed depending on the app you’re using and it adapts to the context, so if you’re in the Windows Store, you’ll be searching for apps, while a search in the People Hub will bring up contacts.

The Settings menu is very discrete and takes up about one fourth of the screen and it’s very intuitive, but there’s always an option to access the more detailed Settings, plus the very detailed Control Panel in desktop mode. The Start button from the Charms brings you to the main tile system no matter where you are in the OS. Moving on with the swipes, if you swipe up you will trigger the options that are specific to a certain up. Think of the swiping up as the Menu button in Android, that shows you the options inside an application. 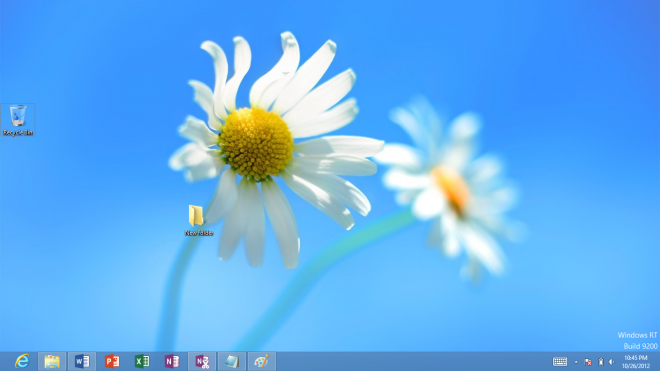 If you do a slight swipe down, that’s a gesture available only in IE 10 for now, showing its tabs. A large swipe from top to bottom of the screen is used to close down an application, replacing the X in the corner of the screen that we were used to in Windows. There’s another cool thing in Windows RT: the management of applications. The apps are automatically paused while not being used and unloaded from the memory for a better functioning of the system. You probably noticed that there’s a Desktop tile that transports you to the classic Desktop view you had in Windows 7.

Well, this view is only a view and that’s it, a mere file browser and interaction area, since it doesn’t allow X86 apps to function there. There’s no Start button here and don’t expect any of the previous apps you had on your PC to work here. Apparently Halo 4 will work on ARM, since it’s being ported right now. Developers can’t make apps for the desktop mode and there’s also no sideloading, in case you’re wondering. In the video review below we also gave you a glimpse into the Windows Store, that only place where you can safely and officially get apps for Win RT. 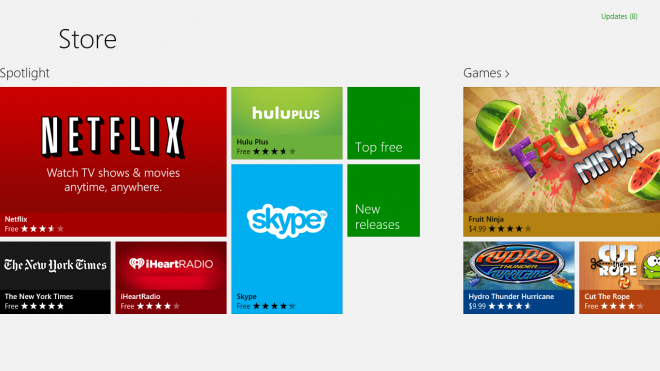 The Store offers a Modern UI view, with horizontal scrolling, clean interface and well organized software. The apps are not that many, but Microsoft promised to reach 100.000 by January, that would be a cool feat. As you can see, we have Internet Explorer 10 here available in two versions: a Desktop one, that classic view from the PC and the RT one. The latter brings an upper area with tabs, the lower one with address bar and the main area with the content. Pages actually load faster then on Android, or so it seems to me and that applies to Tablet-News.com.

It’s very easy to get around tabs and there’s also that cool InPrivate browsing option. This is where we also showed you the 3 types of virtual keyboards available: the standard one, like a bigger Windows Phone keypad, the thump typing divided into two, plus numpad in the middle and handwritting, that recognizes your handwritten words pretty well. Next we moved on to email, a pretty classic experience, with 3 vertical columns, for the folders/sections of your account, emails per se and their content in the third column.

The Calendar also gets a Modern UI horizontal arrangement and looks very clean, while the Bing Maps may look pretty, especially when zoomed in, but they didn’t quite find my exact location. It’s a pretty useful Maps app, but it’s no Google Maps, sadly. We’ve also got a People Hub, since this OS is related to Windows Phone after all. Here you can log into your Live account, Twitter, Facebook or Gmail account and see all of your contacts with cool data like map location or latest status on FB. 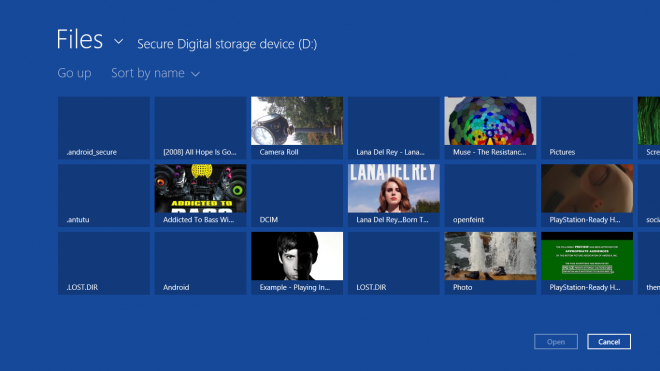 The Music, Games and Video apps are pretty much streamlined into the same concept. We’ve got a duality on their side, with both the online music/game/video purchasing Xbox area and your local area with folders and music/movies you store on your device. The UI is extremely simple when it comes to playback and I like this modern approach and that very clean timeline. Everything is just so minimalistic… The camera UI also keeps it simple, with the main resolution, exposure and focus option on the right side, taking up about 1/4 of the screen.

Another good piece of news is that x86 malware is gone, since it’s not supported any longer. You should probably know that if you own a Transformer Pad 300 you can’t install Windows RT on it, since this platform is not the installable kind, but rather the preinstalled type. We’ve also shown you the YouTube app for Win RT, that looks maybe eggeratedly simple and the Tweetro Twitter client, that has a nifty feature showing you a preview of a page that’s been linked in a tweet.

And then there’s productivity through Office 2013 of course… This one brings you to Desktop mode and offers you 4 nifty apps: Word 2013, Excel 2013, PowerPoint 2013 and OneNote 2013. While the first 3 are basically evolved versions of what you knew already, I have to say that I find it hard to press all those tiny options for fonts or tables with my sausage fingers. That’s definitely touchpad or mouse material, if you ask me and the Office experience isn’t 100% ready for touch. OneNote will allow you to sync notes, drawings and documents with your friends and co-workers, so when you write something, your pal at work sees that thing synced on his desktop or Windows Phone.

Basically Google Docs/Drive on a different scale and the idea here is cooperation with simultaneous editing. This Office is quite the resource eater, since it takes a while to open up and may slow the system down. Speaking of which, apps have a tendency to delay their start after being touch as tile, so Win RT doesn’t quite feel totally finished yet. I must also mention the very discrete notifications, that pop up in the right upper corner of the screen and have a crystalline sound accompanying them. 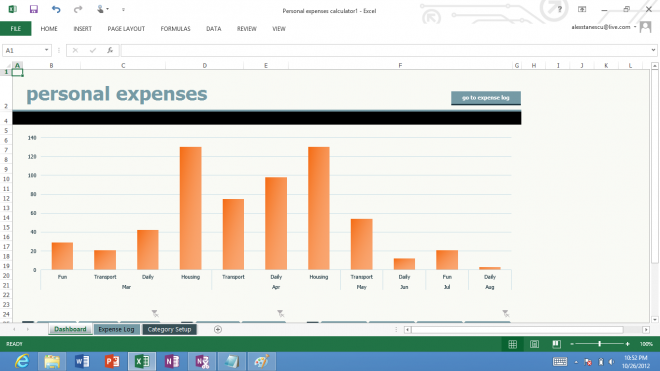 The lockscreen is just like the one on Windows Phone, you slide it up to gain access to the device. Also, know that once you install an app there’s no exact progress bar to show its download or installation progress, which kind of sucks, if you ask me. Anyway, when all’s said and done, this is the next step in the evolution of Windows and although it feels cozy, simple and clean, it also feels half baked. If I were to give it a mark, 7 or 8 would be the best right now… However, with a bunch of proper updates, especially related to speed and sluggishness and a tweak of Office, plus MORE apps, this would beat the Android tablet experience any day.