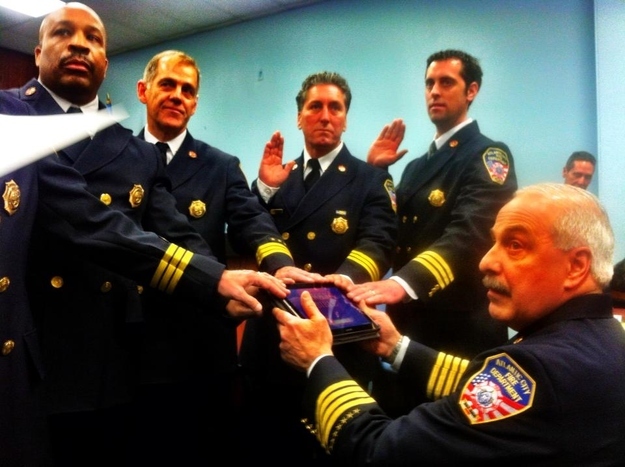 We already know there’s an app for everything out there, but there are some areas where technology can’t cut it… Apparently, New Jersey the iPad is good for everything, since the tablet has recently been used in combo with an app for a swearing in ceremony.

Usually when a firefighter is promoted he must swear with his hand on the Bible, but at the Atlantic City Fire Department they used an e-bible on an iPad. 8 officers put their hands on the glass and metal device, in order to complete the swearing in ceremony. With books becoming a rare item these days, as they’re replaced by digital content, it was expected that it would come to this. Of course, they’re not breaching any law or anything, but it’s just a funny situation when the tradition doesn’t quite apply to a piece of metal.

Probably we’ll start seeing people at weddings licking the iPad screen and pretending they’re eating a digital cake or something. I know it’s not the same thing, but still… how hard is it to find a bible these days? I think the guys were trying to get the party started early and be a bit cheeky.