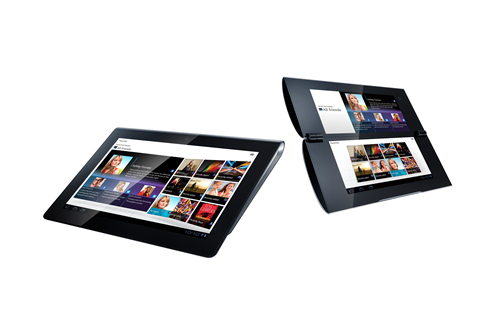 This week is all about IFA 2011, an event taking place in Berlin these days and including the debut of many gadgets, tablets and smartphones. Among those we uncovered two slates we already knew, but under different names: Sony Tablet S and Tablet P. Previously known as the S1 and S2, these models were introduced today in Berlin.

While the tablet S has been compared to a folded magazine, some people are starting to say that it actually resembles an iPad 2 and I don’t even want to hear the conspiracy theories here. But here’s the specs list to keep you busy:

This asymmetrical gadget weighs 598 grams in the WiFi only version and 625 grams in the 3G one. Also, it comes with Android 3.1 in the WiFi only unit, while the one with 3G uses the upgraded Android 3.2. Expect the WiFi Sony Tablet S in Europe at the end of September, priced at 479 euros in the 16GB flavor and 579 euros in the 32GB one. Mid-November will bring you the 3G unit with a 599 euro price tag.

Moving on to the clamshell tablet, the Sony Tablet P offers these specs:

The device weighs about 372 grams, which is incredible for any tablet out there, regardless of the screen size. Tablet P will be offered only with a WiFi+3G combo and it will come to Europe in mid-November with a 599 euro price tag. Here’s a video of the official debut: