After being showcased at CES 2013 on a tablet and at MWC 2013 on a ZTE phablet, the Snapdragon 800 processor is finally ready to enter mass production and hit some major devices. Sadly, the ZTE Grand Memo from MWC was launched recently, but without the Qualcomm CPU on board. 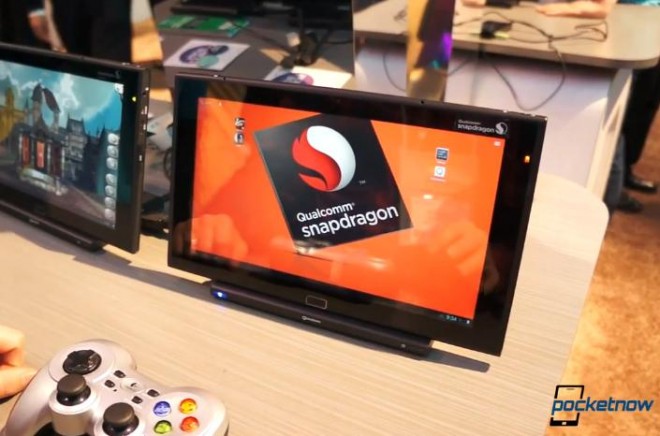 Meanwhile, on the market we already have the HTC One and Samsung Galaxy S4 with the Snapdragon 600, while the HTC First debuted the Snapdragon 400. The 800 version is the only one lacking and I suppose that there will be some hardcore tablets waiting to be unveiled, with this processor on board. The good thing here is that we get a new GPU, the Adreno 330 and Krait 400 cores, so we expect a big jump in performance and graphics.

If I remember, correctly at MWC and CES, the demos of this CPU focused on multitasking of video rendering/editing, a tough task to pull on mobile. Still, the prototypes handled it, with 4 video streams in Full HD being played at the same time on the tablet you see pictured above. Maybe we’ll see some finalized Snapdragon 800 tablets this summer at IFA.

TransPhone Phone Inside a Tablet Copies the ASUS Padfone, in 7...