There’s a new Skype in town and strangely it debuted on the Mac and older Windows versions first, skipping Windows 10 for some reason. Microsoft is now offering the modern Skype experience to Windows and Mac users. Originally, this flavor was seen on the iPhone and Android devices and the changes and novelty were well received.

The design has changed and it looks more modern, maybe even one step closer to Fluent Design. There’s a brand new notification panel and support for add-ins like PayPal, Giphy and customizable themes. To make it clear, the new Skype is only available on older Windows devices, running on Windows 7 or Windows 8, or the Windows 10 November Update 2016. 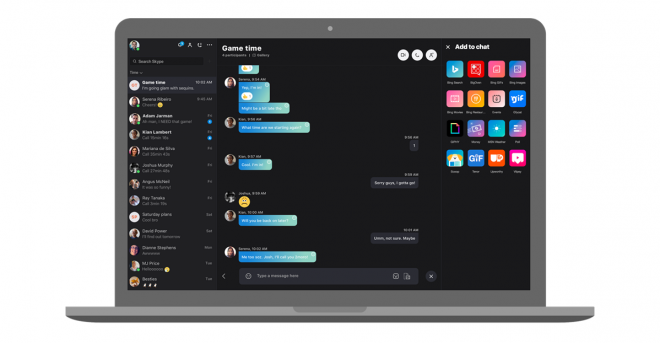 If you’re on Windows 10, the freshest one, though luck. It appears that MS wants to deliver something special for Windows 10 users and it’ll be rolling out “shortly”. Things are now more colorful, more hip, like for example group conversatons feature color-coded shades of blue, orange and pink. There’s also the option to react with emoji icons, like those in Facebook Messenger. Those also apply during video calls.

Extra personalization options are included, with a new darker theme and you can organize contacts by time, unread and status. We’ve also got a media gallery associated with each chat, letting you locate the content taken from a conversation. We’re talking about links, files and media.

You can get the latest version here.