Samsung Galaxy Tab S 8.4 is a tablet that comes with a 8.4-inch Super AMOLED WQHD display who offers a 359 ppi pixel density. We can choose between two CPU solution, so we can buy either the version with a quad-core Snapdragon 800 processor clocked at 2.3 GHz (LTE version), or the WiFi-only model with an octa-core Exynos 5 processor (four 1.3 GHz Cortex A7 cores + four 1.9 GHz Cortex A9 cores).

The tablet also offers 3 GB of RAM, 16 or 32 GB of storage, a microSD card slot up to 128 GB, a 8-megapixel camera on the back with LED flash and a 2.1 megapixel front-facing camera. We get a 4.900 mAh battery, an infrared port and a fingerprint scanner. Samsung Galaxy Tab S 8.4 inch weighs just 294 grams and measures 6.6 mm in thickness.

Getting to the bigger model, the Galaxy Tab S 10.5 version, we find out that most of the specs are similar to the 8.4-inch version. In this case we get a 10.5-inch Super AMOLED WQHD display (288 ppi) and the same hardware package as the Galaxy Tab S 8.4. The tablet offers a 7900 mAh battery, weighs 465 grams and measures 6.6 mm in thickness. 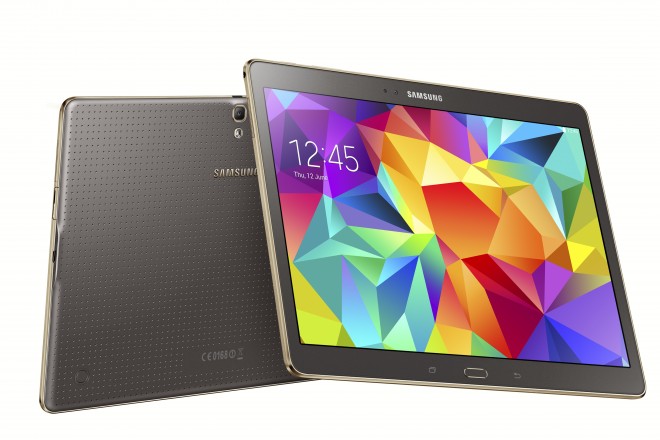 Regarding the availability and the price, we find out that the preorders starts today in US and that the first tablet will be shipped in July. While the 8.4 inch WiFi version will have a $399 pricetag, the 10.5 Galaxy Tab S WiFi version will be available at a $499 pricetag.