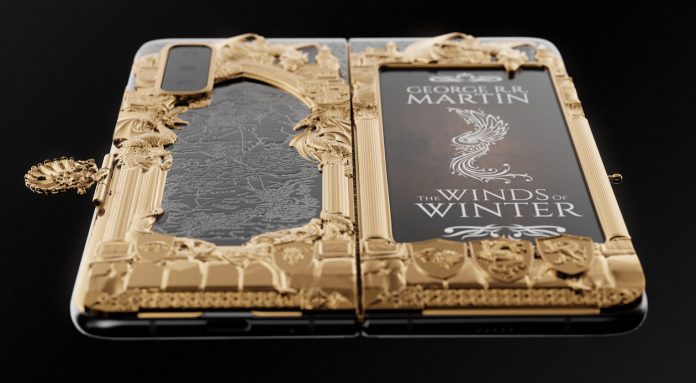 Samsung Galaxy Fold may have been troubled by some issues when it was reviewed by the main guys in tech, but that doesn’t stop it from becoming fancy in this latest Caviar edition. Caviar is a Russian firm, that adorns smartphones, tablets and gadgets in general with gold and precious materials. The Galaxy Fold just got a Game of Thrones limited edition.

Caviar actually launched 3 versions of the golden Galaxy Fold, one Game of Thrones, one Leather and one Carbon. The phone is not even in stores yet, so that’s rather odd. The most lovely of the three models is definitely the Game of Thrones one, adorned with gold, motifs from the show’s houses and dragons. There’s even the cover of the book on one side and a small fancy latch, with medieval influences to close the device like a chest.

An engraved map of Westeros is also here. Just 7 units of this limited edition were made and one was gifted to George R. R. Martin, the author of Game of Thrones. The price is obviously huge, at $8180, 4 times the regular amount paid for the Galaxy Fold. Last we heard Samsung had fixed all issues with the device and it was preparing for its launch again.

The other two Caviar models aren’t cheap either, at around $5800 a pop. Hopefully all the customization and engraving didn’t affect the foldable phone’s functionality… Specs stay the same: a 7.3 inch Infinity FlexDisplay, that folds to a smaller 4.6 inch screen. There’s also 5G support here and 12 GB of RAM, plus 3 back cameras.