Another day, another foldable phone patent, this time coming from Samsung. It’s a foldable phone that has a foldable metal part between the two displays, from what the documents are telling us. This may or may not be the Galaxy X, so don’t bet on any name right now. Let’s see what we do know.

So, first of all Samsung has filed this patent with the World Intellectual Property Organization (WIPO). It clearly shows a Samsung device with two large screens and a metal strip between then. When not in use, the device’s two panels will fold together and protect the screen. The metal strip between the screens is able to bend in different ways. The device has 3 antennae which make sure there’s no effect on the signal caused by the foldable design. 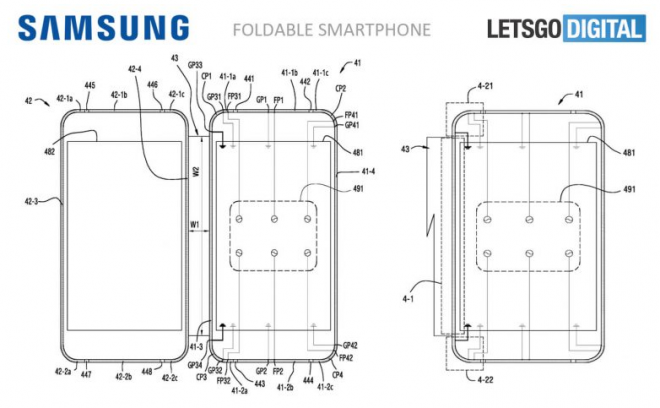 When the device is in use, both screens can be used at the same time and either of them can be bent backwards, if the user wants to use only one screen at a time. As this patent came up, rumors about a Galaxy X unveiling at CES 2018 were on the up and up. CES takes place next month in Vegas and it should at least give us a prototype of the much leaked machine.

Codenamed SM-G888N0, the device appeared on a support site last month, but there was no info about the handset back then. Galaxy X will be produced in only 100.000 units, but it if catches on, it may be mass produced. I have to admit I’m not a fan of this design shown in the patent. The smaller the foldable/hinge part, the better the design in my book. Feel free to also check out the Microsoft foldable phone here.