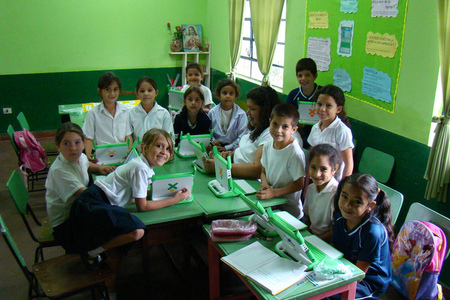 The OLPC program (One Laptop Per Child) started with the most honorable intentions: shipping the affordable and durable computers to students in developing countries, in order to help the learning process. It all started in 2007 and since then over a 1 million units have reached countries all over the world… however, a fresh study shows that the learning process didn’t actually evolve.

A new study of 319 primary schools in Peru taking place over 15 months has found that the students’ Math skills and language test scores didn’t improve at all after the laptops came. The study was done by the Inter American Development Bank and the results also show that the laptops didn’t make the learning/schoolwork or reading more appealing to pupils. IDB says that the OLPC doesn’t come with enough guidance for teachers, so that they can educate the little ones on the benefits of the devices in their classes.

However, IDB does mention some positive effects of the program, like the fact that more students and households have access to a computer now. The ratio of PCs to students has increased from 0.28 to 1.18 and children are familiar with the most basic uses of a computer, stuff like word processing for example. Cognitive abilities were also increased, but in the end if math and language don’t improve, it’s all in vain… So maybe the next time an OLPC program is launched, it may involve tablets and more functionality!

Kano PC is DIY Tablet With Windows, Now Up For Preorder...