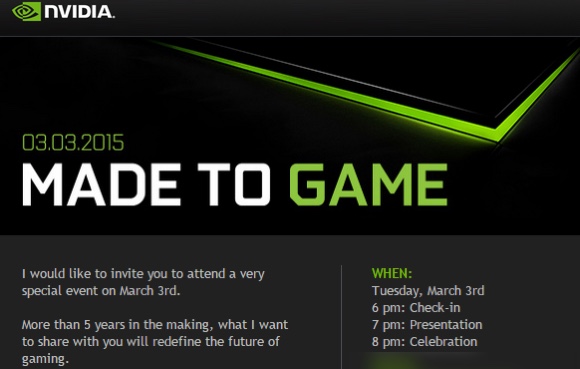 Nvidia has started sending out invitations to an event scheduled on March 3rd, when they promise to “redefine the future of gaming”. They also claim they had this product 5 years in the making.

We could see a follow-up to the Nvidia Shield Tablet, especially since there was a recent report online saying to expect the new Shield in mid March, with the Nvidia Tegra X1 chipset on board. The Tegra X1 was unveiled at CES 2015, with a powerful 1 teraflop of performance. Of course, we could see something else entirely from Nvidia, so this is just speculation.

It’s possible they may just announce new gaming gear for desktop, maybe some VR stuff or maybe even a console or a special Steam device. Anyway, betting on mobile is safe these days, since gaming is done on the go, so a Shield Tablet 2 should do just fine for all gamers. We expect to see an 8 inch screen on board again, with a Quad HD resolution maybe and 4 GB of RAM to accompany it, 32 GB of storage and strong cameras.