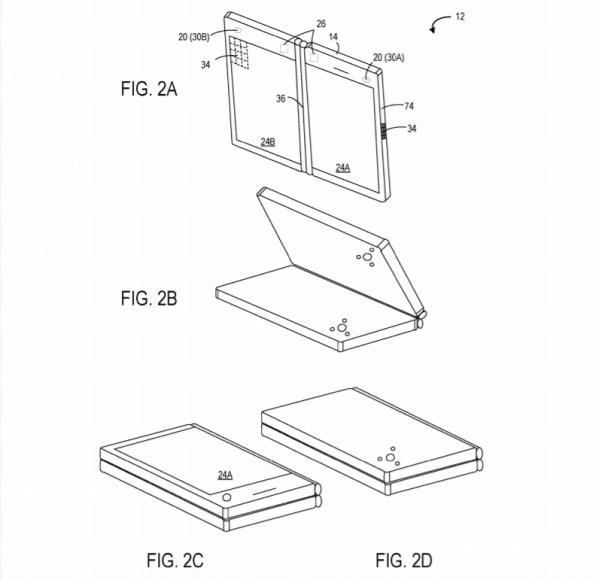 Another day, another patent for a foldable device, or a dual display device appears online. This time it’s a Microsoft patent, that has to do with a dual screen mobile device, that has a camera on each screen.

This patent was registered back in June 2017 and it was published this month by the USPTO (US Patent and Trademark Office). It shows how Microsoft is exploring new formats for mobile computing. It’s not very clear if this is related to the Andromeda Project or not, but it may well be. This could easily end up as a laptop, since we don’t have any sort of measurements for the device.

This is clearly a dual screen device, each display with its own camera and it offers a dual screen dual camera setu. The two screens are set up in such a way that they allow “the first and second display devices to each simultaneously display image data captured by the second camera and image data received from a remote computing device”.

Microsoft did anticipate problems with video calls, particularly when there are multiple participants in them and a variety of positions. Multi screen mobile devices have trouble with calls in this way, so that’s why two cameras are needed, one on each side of the device. In order to solve this issue, this patent came up, including a housing that has a first part and a second part.

The firstone includes the first screen and camera, the second one its own panel and camera. The cameras are reconfigurable for various actions. MS should be very careful where it places cameras, since I’ve seen phone makers who put the selfie camera at the bottom of the phone failing to get what the customer needs.

New Microsoft Surface 2 Tablets Up for Preorder in UK