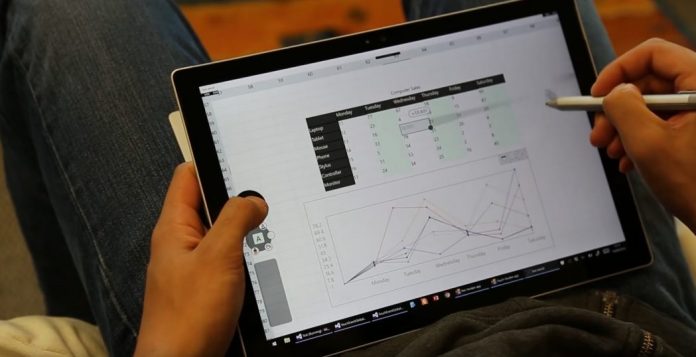 I never understand Microsoft’s strategy… one minute they’re making Windows 8 and RT, then they’re killing RT and now it’s sort of back as Windows 10 ARM… And then they seemed to make Windows 10 less tablet friendly than Windows 8, but now they’re working on making it friendly again.

Anyway, Microsoft Research is said to be testing thumb and pen support, in order to make Windows 10 more tablet friendly. The video below was actually published in May and hinted at the way thumb and pen interactions would look like in the best case scenario.

The idea is to complement the pen support with a more natural user flow and expand functionality thus. Basically, we will be using the pen and touch input at the same time. The thumb can manipulate many controls and for example it’ll be used to select cells and copy them, while also annotating stuff with the pen.

Drawing and web browsing are also covered in this demo video. The fingers can be used for zoom purposes, which is something the pen can’t do. Windows 10 Fall Creator Update has many desktop features, but tablet… not so many. People who actually liked Windows 8 have been complaining that they felt neglected with the latest Windows 10 releases.

We expect improvements before the year is out.