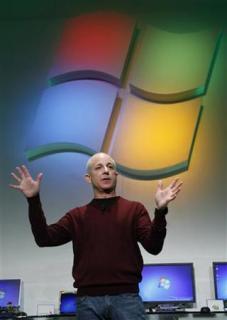 Reuters informs us that Microsoft will be pulling a nifty stunt next week, by unveiling and demoing Windows 8 on a tablet PC on stage. This is not the first time we’ve seen a demo of Win 8, since CEO Steve Ballmer also offered a sneak peek of the OS last year.

This time, it will be turn of Windows chief Steven Sinofsky to showcase an early version of the touch-supporting and tablet-friendly platform that’s right now codenamed Windows 8. This demo will take place during the annual Microsoft conference in Anaheim, taking place next Tuesday. Investors really want to see the future here, so much is at stake. We all know how the next iOS will look on the iPad 3, or at least we can imagine, while Android Ice Cream Sandwich shouldn’t surprise us either, so surprises must come from Microsoft this time.

Microsoft has yet to enter the tablet biz hardware-wise, although it had the Courier among its plans for a while, but that’s ancient history right now. It’s pretty interesting to note that MS foretold the tablet-based future 10 years ago and still they’re struggling to find their place on the iPad-ruled market.

Last we heard, HP and Microsoft were shaking hands and showing off a prototype slate in 2010 that didn’t even make it to the stores… Will Ballmer and co finally strike Apple?