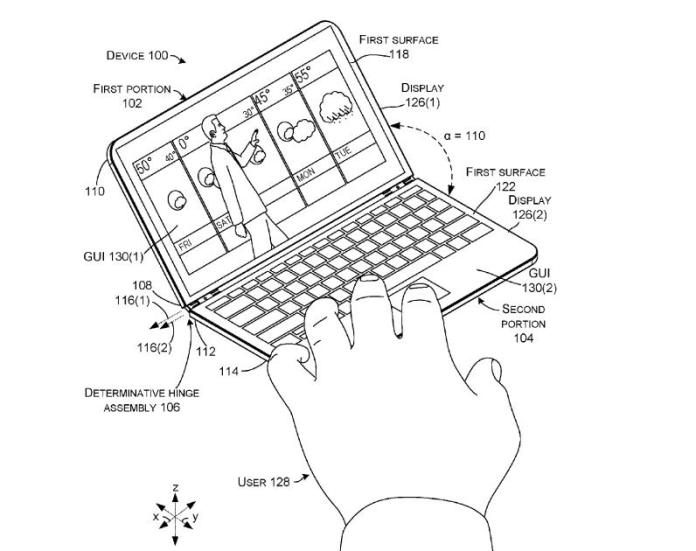 Microsoft has been working on a foldable device for a while now, known as either Surface Phone or Andromeda. We’ve seen numerous patents leaked for the device and the latest one hints at more of a mini laptop than your average smartphone. Let’s dig!

Up until now the Andromeda project was associated to a foldable device, that has telephony capabilities and runs on the Windows Core OS. This means that the unit could be a phone when folded and a tablet when unfolded. Twitter user WalkingCat discovered a patent that documents explanations for the device format. It describes the way the folding technology works and some usage cases.

The patent shows a hinged foldable device, but there’s an interesting feat here. When it’s unfolded, one of the two screens could work like a main display, while the second one works as a keyboard. This can turn the Andromeda device into a potential mini laptop. When totally opened, it can become a full fledged big tablet. It’s clear it’ll run at least Windows Core OS (WCOS), if not full Windows.

WCOS is supposed to be a modular OS, that switches dynamically between shells and composers depending on the form factor. Microsoft is attempting to get back into the mobile world for sure, but the way to do that is trickier than ever.