After a few Samsung patents related to a dual display machine, now we come across a Microsoft dual display device, shown in patent form here. This time there’s no ambiguity, this is truly a mini laptop of sorts and one of the screens becomes a virtual keyboard.

Another patent related to the device has appeared online, featuring “video calling on hinged multi screen devices”. This new patent was found by Windows Latest and published by the USPTO. It shows a dual screen folding mobile device, with both screens hooked up via a hinge. It shows various modes of usage, like “laptop mode”, where one screen becomes a virtual keyboard.

If both screens are laid down flat, the interface will expand to both screens and the resolution increases according to your activity. This will be much like a hybrid notebook and it will also be usable in a “tent” mode, meant for watching videos and multiple other iterations. You can fold it, turn it around, use it as a bigger smartphone of sorts. The hinge isn’t clearly detailed here, but it feels like the one of a Surface Book or Lenovo Yoga Book.

With Surface Phone and the Andromeda Project in the air right now, nothing is for sure and nothing is certain at this point. We can’t tell what will really exist and what’s just speculation and patent. 99% it’s all fiction and the final product will be more grounded. Microsoft has canned even more realistic projects before, so don’t read too much into this. 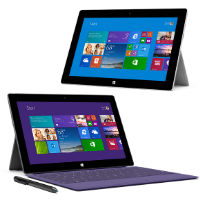 Surface 2 Preorders Start Selling Out, Still No Number of Units...