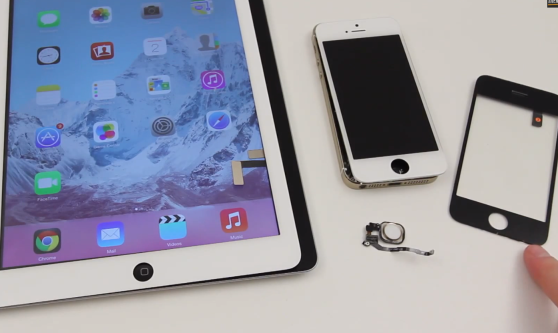 There’s an interesting experiment in the video below also shown in the picture: it appears that the new and improved iPhone 5s Home button with fingerprint scanner would fit perfectly within the front panel of the iPad 5.

We’ve already heard speculations that the next gen iPad may feature the Touch ID fingerprint scanner and now there’s proof regarding that direction. Unbox Therapy’s Lewis Hilsenteger had the idea to do some surgery on the iPhone 5s just to test this concept. The iPhone’s fingerprint sensor fits the Home button opening on the iPad 5 front panel perfectly.

Hilsenteger did say that nothing is confirmed till Apple announces it, but this seems to align too well to be just a coincidence. The iPhone 5 Home button doesn’t fit the new iPad front panel, just so you know. Touch ID feels like a technology that’s here to stay, just like Lightning did once it debuted on iOS products.