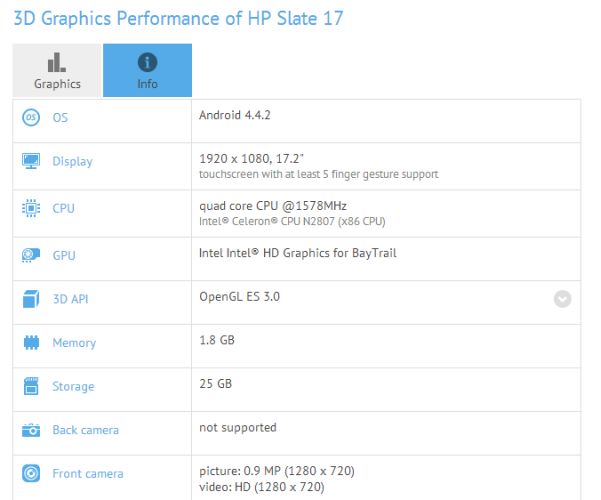 HP is supposed to be working on a mega tablet, the HP Slate 17, that’s expected to be an all in one desktop/tablet combo with a 17 inch screen. The company already has a 21 inch HP Slate 21 out and a Slate 21 Pro model, so it doesn’t quite surprise us.

We actually have proof regarding the device, thanks to a series of benchmarks that leaked on the web. The HP Slate 17 has appeared online via the benchmark site GFXBench. The product features a 17.1 inch 1920 x 1080 pixel display and inside we’ve got an Intel Celeron N2807 dual core Bay Trail processor, as well as 2 GB of RAM and 32 GB of built in storage. The OS is Android 4.4 KitKat and there’s also WiFi on board, as well as a front facing camera.

There’s no rear camera, Bluetooth or GPS. The HP Slate 17 is expected to be some sort of desktop monitor, that can also be used as a standalone Android slate, doing web browsing, playing video or games, when a PC is not connected. The HP Slate series of all in one machines integrates built in batteries, so these models are portable. Expect a high price!

HTC Flyer to Get Honeycomb Upgrade; Will it Be the Only...