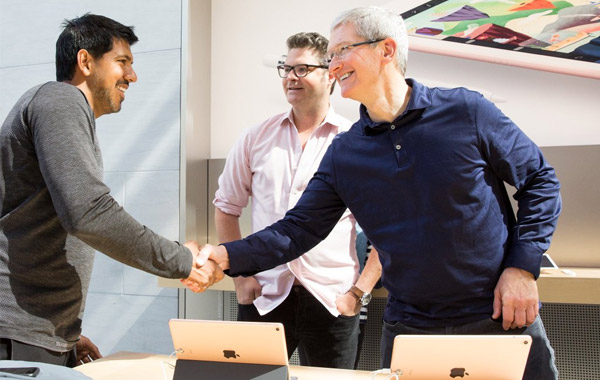 As you know, after Apple’s event on the 21st of March, the preorders for their new products started on March 24th. Then on March 31st delivers started happening for both the iPhone SE and the iPad Pro 9.7 and physical stores started offering them as well. Tim Cook, Apple’s CEO was present at one such physical launch.

He attended the debut of the new iPhone and iPad Pro at a Palo Alto Store, a tradition that dates back from the days of Steve Jobs. Apple’s CEO traditionally stopped at a store close to the Apple Campus to see how things were going. Meet and greets happened and Cook was seen speaking to Store employees and taking selfies with customers.

He then posted on Twitter congratulatory messages for the fresh owners of the iPhone SE and iPad Pro. Interesting to note is the fact that the store in question wasn’t exactly packed with customers, which is not exactly a surprise, since the iPhone SE isn’t a flagship and the iPad Pro is priced pretty steeply. It goes for $599 as the starting price and keeps some of the specs of the 12.9 inch model, but in a format resembling the iPad Air 2.

Of course, the lack of a queue is also justified by the fact people are shopping online nowadays. I’m pretty sure the new iPad will sell pretty well, just like the 12 inch iPad Pro.