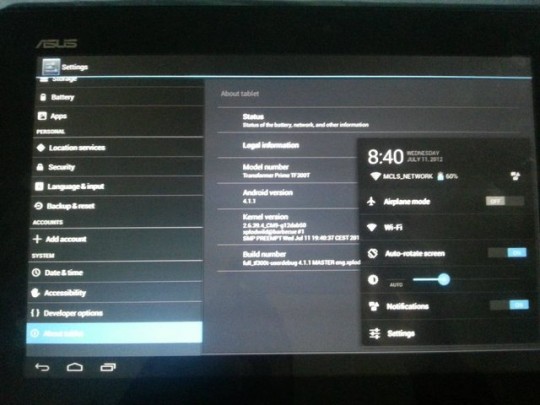 Google recently released Android 4.1.1 Jelly Bean onto the Google Nexus 7, that’s right found in the property of the guys who attended I/O 2012. That AOSP update has somehow hit the Transformer Pad TF300T, through an experimental (and quite stable) AOSP Jelly Bean build.

If you’re still craving for the Nexus 7, you can cut the crave with this release on the TF300T, since it does have a Tegra 3 CPU like the Nexus slate. The build is tweaked straight from AOSP and not the SDK, so it’s pretty much close to the official release. XDA Developer XpLoDWilD said that this build is extremely experimental, but the progress with porting it over to the ASUS quad core slate was successful. He also describes this work as a preview of what’s coming in CyanogenMod 10 and other fresh ROMs.

Of course, there are caveats here: camera doesn’t work, volume is stuck at 50% and hardware video playback is bugged. WiFi and Bluetooth work just fine, luckily, as well as the sensors. The source link below has all the download and instructions you need.

IFA 2017: Lenovo Home Assistant is a Smart speaker With Alexa,...