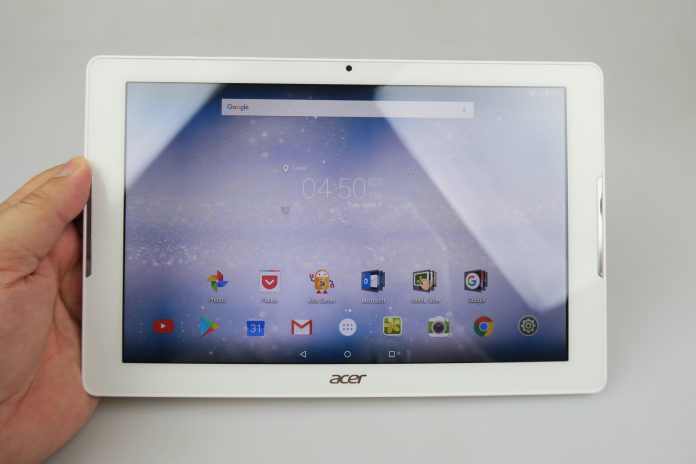 Acer Iconia One 10 (B3 A310) isn’t the freshest pea in the pod, the latest tablet on the market, but it’s an interesting proposition, if you strictly want to watch movies. It’s also a winner if you intend to buy it and place its plasticky mass in front of your junior. This entry level machine debuted last year, as a 10 incher that right now is priced at $120.

The 10.1 inch tablet weighs a pretty hefty 520 grams, but it’s reasonably easy to wield for movie watching. It measures 9.15 mm and has big bezels, good enough for you to rest those weary thumbs. It’s got a grippy back texture, so you can hold the machine for long hours with ease. The facade is a bit of a fingerprint magnet, though… Sadly, the build feels even cheaper than the actual price of the device. It even creaks sometimes. 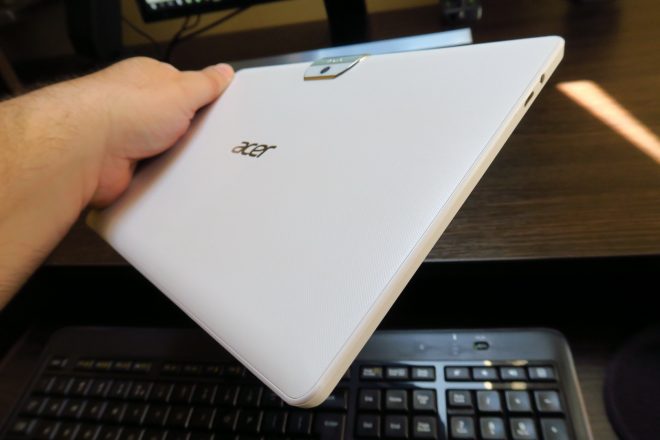 It’s all plastic, but even in spite of that this Acer Iconia One 10 has a nicely designed camera area, with a lid that hides the microUSB and microSD. The speakers are also quite nice looking. On the display front, we’re getting an IPS LCD with a 1280 x 800 pixel resolution and 10 point multi touch. It shows pretty OK colors and has a decent brightness indoors.

View angles and contrast also rather OK, but only indoors. When the sun hits the screen, it’s game over pretty much. We measured 242 LUX units here and saw an RGB Stripes pixel setup under the microscope. With the above mentioned brightness result we scored below the ASUS ZenPad 10 and also above the Chuwi Vi8, plus the Utok Hello 7Q LTE. I would say it’s reasonable just for indoor use. 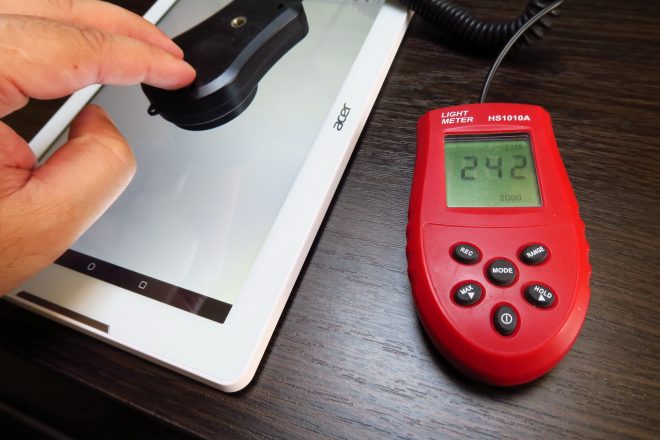 Finally you can only tweak settings like brightness and font in the Display area. Moving on to hardware, we get here a quad core MediaTek MT8163 chipset, clocked at 1.3 GHz. There’s a Mali T720 GPU in the mix and the RAM quantity is 1 GB of DDR3L SDRAM. The storage is at 16 GB, of which 9 GB are available to the user. There’s also a microSD card slot here, by the way.

Sadly, the tablet has quite a big of lag, even when performing basic tasks. It also appears in games, like Riptide GP Renegade, that have serious hiccups and delays. In benchmarks we scored above the Samsung Galaxy Tab A 9.7 in some tests and also above the Cube i7 Remix in GFXBench. In spite of those relatively enthusiastic claims, the fact we have results similar to the 2013 ASUS MeMoPad FHD 10 is certainly no compliment for this tablet and its old CPU. 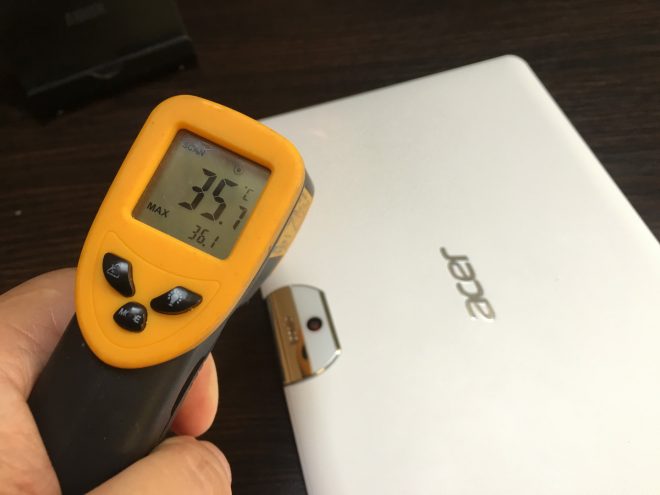 At least the temperature was not a problem, as we got to 36.1 degrees Celsius after running GFXBench and 36 in Riptide GP, so there’s no overheating here. On the battery front, we’ve got a 6100 mAh Li-Po unit, that offered us 7 hours and 14 minutes of video playback, which I guess is OK for this price. Any other alternative from China at a similar price will have a hard time breaking 8 or 9 hours.

We also beat the Xiaomi Mi Pad 2 with this result and the ASUS ZenPad S 8.0, but scored below the Samsung Galaxy Tab A 9.7. In PCMark we reached 5 hours and 8 minutes, which is rather OK and superior to the ASUS ZenPad S 8.0 and Onda OBook 20 Plus. We remained below Nokia N1 and Galaxy Tab S2 9.7. Charging was done in 3 hours and 27 minutes, a bit on the long side, but still quite OK. 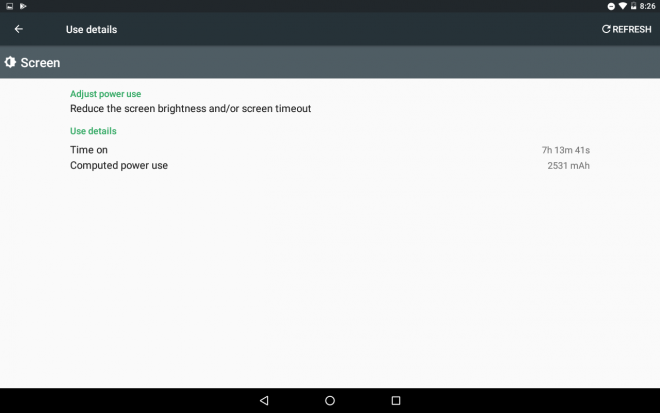 It’s superior to the Galaxy Tab A and Nokia N1, this time at least. By the way, one hour of charging equals 47% battery and 30 minutes is 24%. Battery Saver and Optimization are also here. Considering the recommendations of psychologists about kids’ use of tablets, the battery results are enough for the kid segment. On the audio front we are greeted by two healthy stereo speakers, on the front lateral sides.

They offer pretty good clarity, they’re loud and the bass wasn’t half bad. We did experience a sort of hissing sound at maximum volume and with extreme sounds like piano keys or strident guitars. The equalizer is stock Android material and the decibelmeter we used showed 80.1 dBA upfront and 77.3 dBA at the back (with typical audio sample). This is not top 10 material for sure. 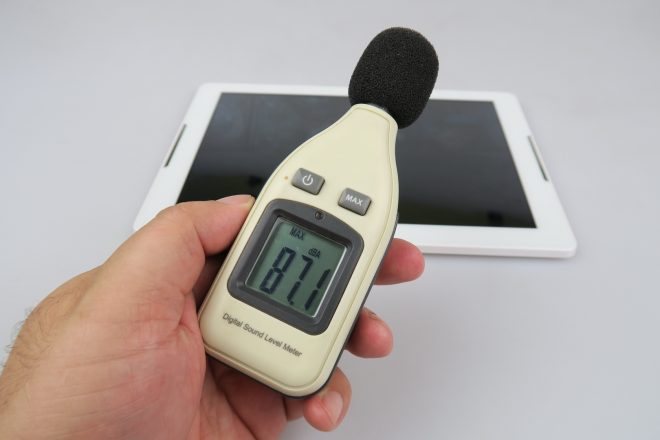 With Riptide GP and gaming in general we got to 87.1 dBA, which sounds a bit better and at least we beat the ASUS ZenPad S 8.0 (first test). The smaller Xiaomi Mi Pad and Nokia N1 have quite a few decibels above this model. Interestingly, I felt that in real life the speakers sounded a bit louder than what we experienced with the decibelmeter.

Moving on to the camera, there’s a 5 MP back shooter here and a 2 MP front cam. The camera is laggy, takes unimpressive shots, but it’s mounted on a 10 inch tablet after all, so expectations were minuscule. At least you can use the front camera for Skype. The main one also offers features like HDR and Panorama, but results are forgettable at best. 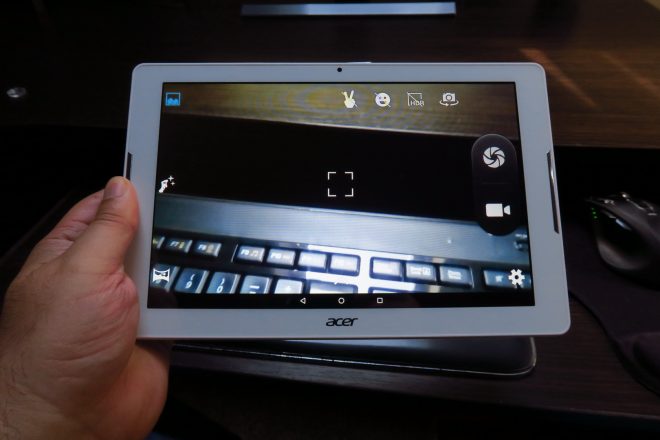 We also did a browser test and found Chrome to provide medium level speed here, while the benchmarks were underwhelming. On the connectivity front there’s WiFi a/b/g/n, Bluetooth 4.0 and microUSB 2.0, with no NFC or other feats. There’s also an audio jack here. As far as the OS and UI go, Acer Iconia One 10 (B3 A310) runs on Android 6.0 Marshmallow, with a ton of apps preinstalled. 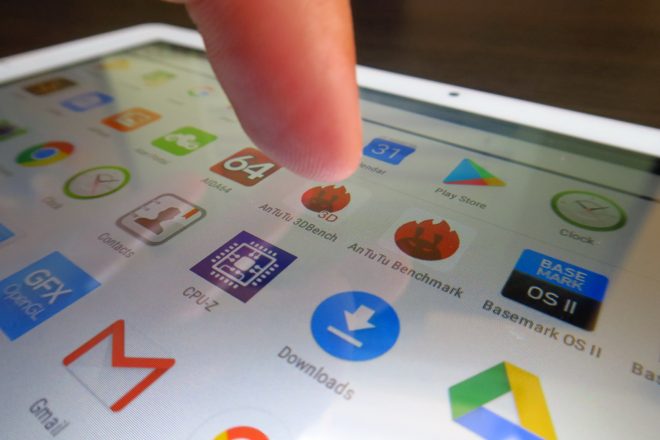 The leftmost homescreen shows News and social network feeds, quite a bit like Flipboard to be honest. The widgets on the device are stock, as are the dropdown area and Quick Settings. Multitasking is done via carousel and there’s also a Clean option. The preinstalled apps list includes 42 names and we find here stuff like AB Files, AB Photo, an Acer Portal and a Kids Center.

That one is basically its own environment, with separate app store, video store, games and all sorts of kids fun stuff. There’s a funky and colorful UI, quirky sounds when touching icons and of course a Safe Mode and Parental Control. To me these are enough to keep the little one entertained for long hours. For adults we have Excel, Powerpoint, Word and Skype, as well as EZ Snap and EZ Utilities. 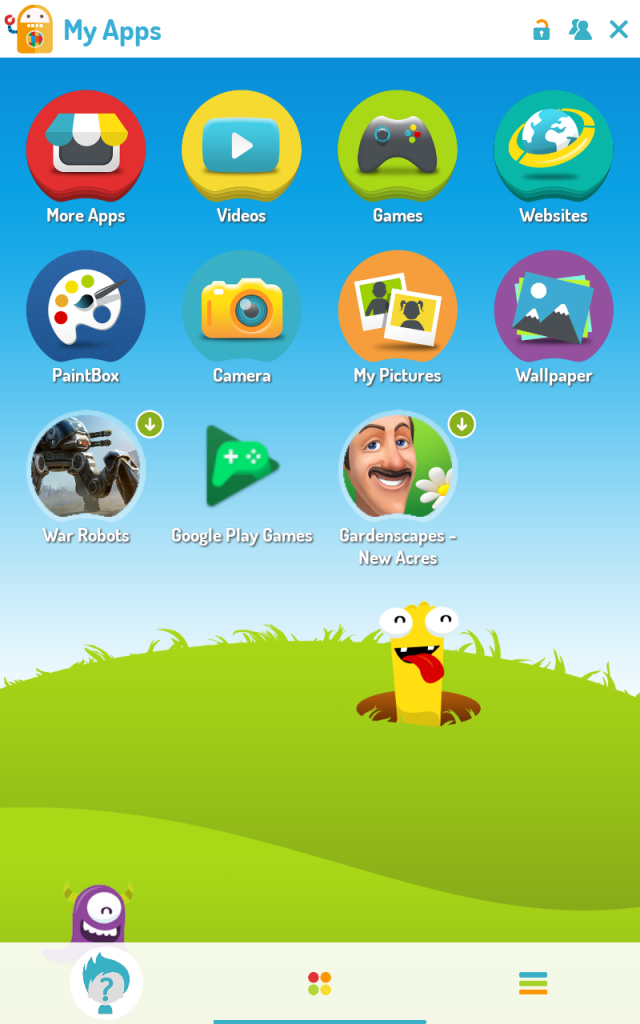 Opera Max and a special Paint app for Kids are also included. Now I guess it’s time for the verdict!

The Acer Iconia One 10 (B3 A310) remains to me a very good kids tablet and a music and video consumption device. Some sacrifices have been made in areas like build, CPU, RAM and a few more, but the battery and acoustics are reasonable. The problem is that Amazon has children tablets at about half the price, but also smaller. Another problem is that for $99 you can get better tablets from China.

Still, if you’re looking to keep a toddler entertained this may just be it. I feel the need to advise caution when handing over such a slate to a child and his vulnerable mind. I recommend that you do that after age 6 or 7. You can get it here.