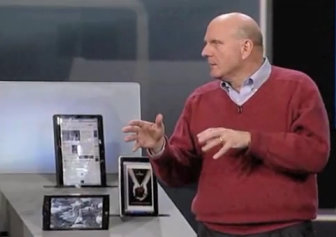 Microsoft could surprise us all next month during the CES 2011 tech show and showcase a Windows 8-based slate, plus a bunch of other appealing devices. Not many details are available right, as New York Times reports that the Redmond giant is now ready to take on the iPad, by showing off some slates built by Dell and Samsung.

The Samsung unit is described as being similar to the iPad, but not as thin, plus the rumors concerning its sliding keyboard and unusual form factor are back. Could this be the Samsung Gloria we’ve been hearing about? This device is supposed to run Win 7, feature a sliding QWERTY keyboard, a 10 inch display and a layered UI.

Windows 8 slates remain a mystery, although Engadget is claiming that the new OS is the key of the new tablet-based Microsoft strategy, but the platform will only be available in H2 2011 or even 2012.

Microsoft Surface Duo Gets a $200 Price Cut, Now Sold for...