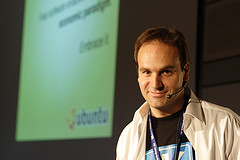 People have been preparing for a Linux takeover of the world for years now, but the platform has yet to make an impact that really matters, as a mainstream choice of the public. Mark Shuttleworth wants to expand the operating system’s reach by bringing it to smartphones, tablets and TVs.

Shuttleworth is the founder of Canonical, the company that made Ubuntu Linux and now he plans to unveil the platform’s future at the Ubuntu Developer Summit in Orlando, FL. Mark wants to make the next Ubuntu (12.04) as stable as possible, so it will be fit for both the home and business experience and customers. Many people have been praising the looks of Unity, the GNOME-based desktop and wanted to see it on tablets.

After all, back in Fall 2010 when Unity came, Jono Bacon, the Ubuntu Community manager discussed a potential Ubuntu tablet. Shuttleworth has been talking to potential partners for many months now and wants to make this platform a major player on smartphones and tablets. Ubuntu might be trying to do with the tablet/phone & desktop environment what Microsoft wants to do with the Metro UI on slates with Windows 8 and desktop devices plus WP7 units. That is provide an unified experience on all hardware platforms.

The problem here is that like Win 8 there’s no chance to see a production version any time soon. 2014 was even mentioned as a potential date, so there’s a long way to go for Ubuntu for tablets…