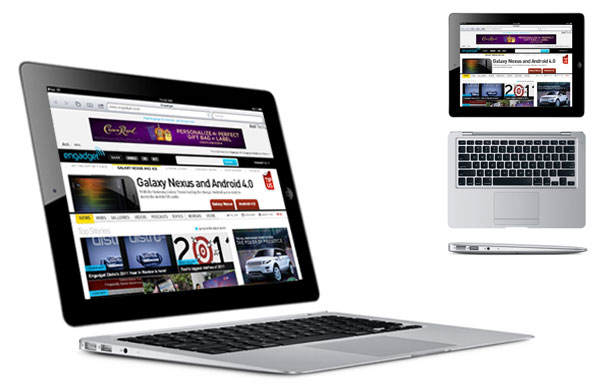 Recently Tim Cook has been pretty vocal about various tablets and laptops. He called the Surface Book a device that “tries too hard to do too much” and when the iPad Pro came out, he said that it would replace laptops. Then today the same Apple CEO goes out and says that the Cupertino giant is not making a hybrid.

Why do we care? Because recently Apple got a patent for a notebook with a detachable display, basically a tablet and notebook hybrid. This is exactly what Cook denied and attacked recently. However, Apple is known for having a huge amount of patents and some of them staying unused. In the same new interview, the Apple boss felt the need to clarify his statements about the iPad Pro.

He said that the iPad Pro would replace only Windows-based notebooks, not MacBooks. Cook went on to say that he recognizes people are using both iOS and Mac devices. This means that in spite of all speculations and hints, iOS and OS X will stay separate and their hardware will too. A converged Mac and iPad aren’t yet ready for prime time.

The main problem is according to the CEO that combining them won’t offer the best of two worlds, but rather limit them. Well, they said the same about the stylus and then the Apple Pencil came out…