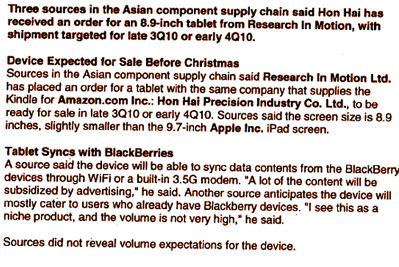 Nothing can surprise us any more, now that even Nokia is planning an entrance on the tablet market, so RIM’s supposed plans of doing so too come as a natural move. Apparently, the BlackBerry maker will join the bunch of companies making iPad rivals, or so claims a research firm close to the situation, according to Crackberry.

Said firm usually checks supply chains for unusual orders and this time they came across 3 sources claiming that RIM has been ordering parts for an 8.9 inch tablet. Orders have been placed with Hon Hai Precision, a branch of Foxconn, the Apple partner making the iPhone and iPad.

Rumour has it that the RIM tablet will be shipped this summer or in Fall and it might run BlackBerry OS 6.0. Also, the device will support syncing with a BlackBerry smartphone via 3G or WiFi. These are all rumours, so take them with a huge grain of salt.