Notion Ink has just announced plans for a second generation Adam tablet, one that will be powered by a Texas Instruments OMAP 4 processor. The device will use Android 4.0 Ice Cream Sandwich and PowerVR SG5xx graphics and you must know that the original Adam got a lot of hype surrounding it last year, but it all went under when this model didn’t prove to be all that impressive.

The first Adam was one of the premiere slates with the Tegra 2 dual core processor and also a premiere for the Pixel Qi low power display that was very readable in sunlight. The problem with this unit is that it was produced in small quantities and Notion Ink didn’t get the fame and traction it had hoped for. The Adam II will probably keep the production pace and since it doesn’t have any premieres to brag about on the CPU and OS side, there’s something else to be first in.

I’m talking about the Modular Based Software Architecture, that allows developers to use the tablet’s hardware with the company’s development tools. As far as pricing and launch date are concerned, everything is a mystery now and I expect a long period of teasing and hyping the product before its debut date. Maybe we’ll see one at MWC! 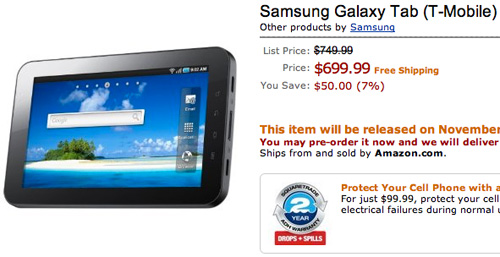 Galaxy Tab on T-Mobile, Available for Pre-Order, Going for $700