A recent report published on Digitimes claims that Nokia’s first Windows 8 tablet and first tablet for that matter will come in Q4. Apparently this is solid leaked info and I have no reason to not believe it, since it sounds plausible. The device is rumored to be a 10 incher with the already famous Metro UI on board and a dual core Qualcomm CPU. 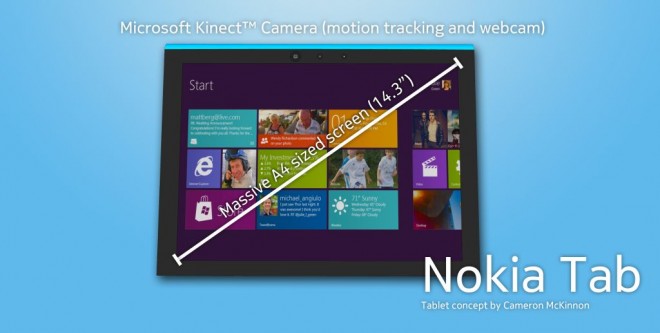 Among the manufacturers of the slate that has sometimes been called by fans “Nokia Tab” there’s Compal, that’s supposed to deliver a batch of 200.000 units. Right now Apple and Google share the tablet, with the Cupertino giant dominating it and the search engine giant getting more and more market share. I’m really curios how much market share Win 8 will have in the tablet segment an year from now. And just like in the case of Windows Phone, Nokia will generate huge sales for them, simply through its name and quality hardware.

Nokia will be joining the Windows on ARM side, as it tries to compete with iOS and Android tablets. So, what do you think? The Lumias were decent phones, but the Booklet 3G was a poor netbook… is the Windows 8 Nokia tablet going to be a flop or a hit? Also, if you’re wondering, the image above is only a concept, not a real Nokia tablet.