The Nokia Lumia 1520 is certainly the biggest Windows Phone device money can buy, a product launched in November 2013 and a device that’s too big for the average user, especially since it has no stylus. This 6 inch phablet is priced at $629 on Amazon and it measures 8.7 mm in thickness. 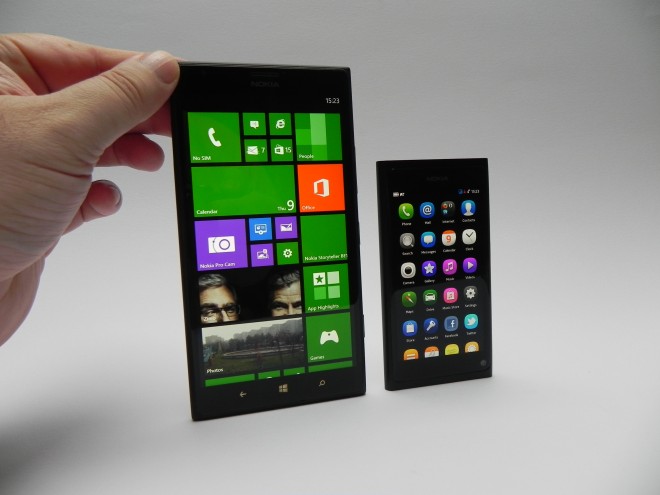 The thickness is not bad considering the overall size of the device and you should know that it also weighs 209 grams. This model adopts an unibody design and it kind of looks like a Lumia 1020 without a hump. Its back area design is very similar to the one of the Lumia 925 and the case is made of polycarbonate. The top and bottom edges are rounded, unlike the Lumia 1020 and all the buttons are on one side.

This huge device has an audio jack at the top, while at the back you’ll find the dual LED flash, the camera and microphone holes, as well as the speaker. Upfront we’ve got a camera, display, capacitive keys and earpiece, while on the upper left side there’s a nano SIM Card slot and microSD card slot.

The case of this model is matte and slightly slippery. We’ve got 2 microphones on the front of the device and two at the back. The design is nice overall, but too big for the average user, as I said. On the hardware side, we’ve got a 6 inch display, a Clear Black IPS LCD with a 1920 x 1080 pixel resolution and Gorilla Glass 2 protection. The CPU inside this handset is a Snapdragon 800 quad core 2.2 GHz unit with Krait 400 cores.

Specs also include 2 GB of RAM, 32 GB of storage, a microSD card slot with support for up to 64 GB, a 20 megapixel Pureview camera with dual LED flash and a front 1.3 megapixel shooter. On the connectivity side, we’ve got a quad band GSM/GPRS/EDGE array of connectivity, with HSDPA 42 Mbps also available, as well as LTE, WiFi dual band, GPS, Glonass, Bluetooth 4.0, NFC and microUSB 2.0.

The device has active noise canceling, wireless charging with special accessories, an accelerometer, gyroscope, proximity sensor and digital compass. On the battery side we’ve got a Li-Ion 3400 mAh unit, good enough for 760 hours of standby functioning and 27 hours of talk time. It should also provide 124 hours of music playback and it has a Battery Save feature as well.

We did test the battery ourselves and with the brightness set on medium and Auto at the same time, plus Full HD video playback on and WiFi on, we achieved a crazy, stunning and amazing time of 17 hours. That’s way past the iPad Mini and all the other tablets I’ve tested, so it’s highly impressive. The battery charges in 2 hours and a half, which is also pretty good.

Moving on to the media side of things, the speaker at the back is slightly underwhelming and while it’s pretty clear, I was expecting a louder experience to be honest. The bass is also pretty weak, but the headphones are superb. We’ve got a comfy experience, a very loud volume and excellent voice and bass. There’s also a bunch of EQ settings in the handset’s Settings area and a Dolby option, too.

Nokia Lumia 1520 comes with FM radio and still lacks a decent fast forward or rewind option on Windows Phone. As far as the screen goes, this 6 incher IPS LCD offers a 368 PPI density, wide view angles, good brightness, vivid colors and nice contrast. The brightness reaches 315 lux units in the center of the screen and 300 lux units on the edges, plus RGP Stripe pixels. You can also use gloves while interacting with the screen and this screen is protected by Gorilla Glass 2 not 3, in case you’re wondering.

In the Settings area you’ll find a way to change the color profile, sunlight readability and overall this is a very good display, I have to say. You can also use a feature called Glance, that allows you to check out a variety of information on the device using its standby screen. You can also adjust the screen rotation to stay in landscape or portrait, which is a feature that came with Windows Phone 8 GDR3. By the way, this display behaves quite well outdoors, so no problems here.

As far as the camera goes, this 20 megapixel Pureview shooter has a sensor size of 1/2.5 inches, Zeiss lens and F/2.4 aperture. It uses a dual LED flash and optical image stabilization. The Nokia Pro Camera is associated with the camera button by default and this cam has a simple UI, that allows you to pull the shutter button and trigger its special features and options. There are 6 camera settings to play with: flash, white balance, focus, ISO, shutter speed and exposure. Luckily messing with the triggers is done lag-free, unlike the Lumia 1020, where the UI was a bit slow.

There’s also the cool Lenses system and instead of HDR we’ve got a system called bracketing, that takes a bunch of pics with different exposures. By the way, the camera’s method of taking pics involves taking two shots actually, one a 16 megapixel sample and the other a 5 megapixel overasampled shot that’s easier to share.

You get lossless zoom of 2X on the 5 megapixel shots, by the way. In the settings area you can also select to shoot raw format pics with a special type of new format: DNG. It stands for digital negative and it comes from Adobe. This one is good if you have to work with editing software, since it stores a lot of info in a 20 MB files. The Smart Cam has now been included in Pro Cam and as usual it takes a burst series of 10 pics at 5 megapixel, then triggering some cool editing modes. 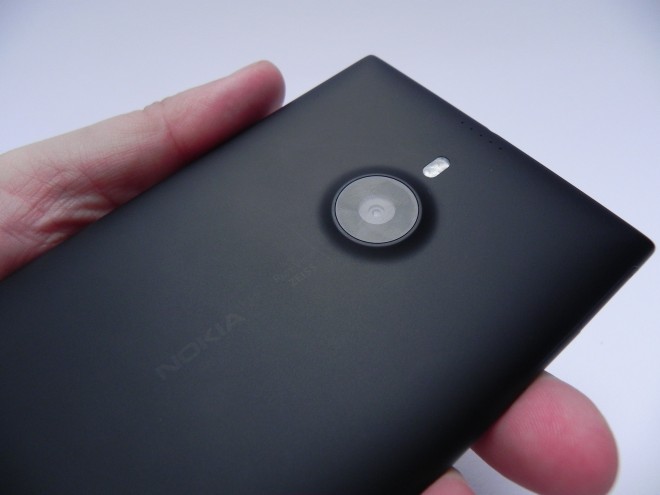 Those include Best Shot, Best Face, object removal, action shot with overlapping moving subjects and motion focus that adds motion blur. Of course, there’s also the standard camera app available here, with the usual options and settings on Windows Phone. Lenses include Cinemagraph, that makes GIFs, Refocus, that’s totally new and cool, Glam Me, that’s used to tweak selfies and Panorama, that speaks for itself. Refocus allows you to take a photo and focus on an area you want afterwards.

The idea is to snap a few shots with various focus points and then choose the one you like. This camera does a max ISO level of 4000 and has a focal length of 26 mm. You can find a detailed gallery of shots and samples here, if you’re curious. I have to say that the pictures taken with the Nokia Lumia 1520 look excellent, even in the dim lighting of December. The colors are excellent, brightness is top notch and so is the level of detail. The contrast is also very good and there’s almost no noise at all. 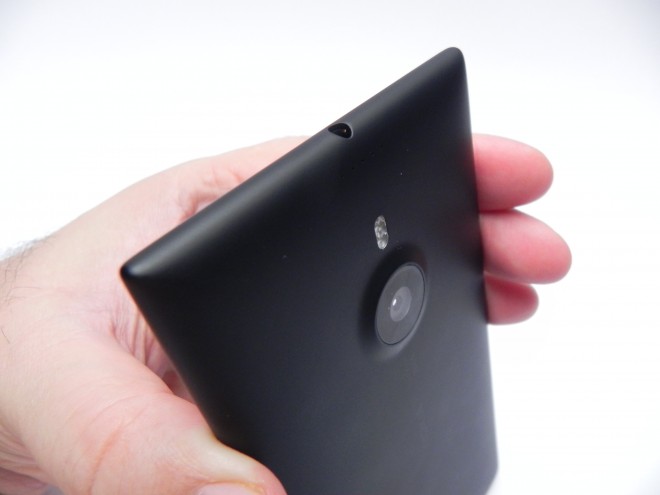 Closeups also look really good, as shown by those Pluto pics. Most of the times you won’t even feel you’re using a Nokia Lumia 1520 and not a Lumia 1020. During night time, the shots are also very good and there’s little noise here, a little bit more than on the Lumia 1020. On the video side of things, we get optical image stabilization, 3X zoom when filming 1080p and 30 FPS Full HD video capture as a max.

There are 4 mics used for Rich Recording, which is mint at concerts, but the oversensitivity of the mics may bother some. You can find a full selection of video samples below:

The audio capture is done in 256 Kbps bitrate and with a 48 KHz sampling rate. Nokia added here an audio bass filter, that filters low frequency noise. It’s sadly too easy to hit the mics by mistake and wind will also affect them negatively. The optical image stabilization is good and the 3x lossless zoom works like a charm.

The resulting videos have a bitrate of 19 Mbps and the bad part of the whole video experience comes in low light when the noise is kind of bothersome. It’s still a better night time camera than 99% of smartphones nowadays. This is the kind of camera that’s perfect for concerts and holidays, if you ask me.

As far as performance goes, this model reaches 45.7 degrees Celsius after 15 minutes of playing Asphalt 8, that’s downright huge, for such a modern model. The phablet is hot and you can actually feel it when handling it. On the benchmark side, there’s not much competition, since this is the highest specced Windows Phone 8 device, with double the points of the Lumia 1020 in AnTuTu (24k versus 12k) and a very good 441 score in WPBench. We also get 1973 points in BrowserMark 2.0 and 558 points in Sunspider, beating the Lumia 1020 each time. Internet Explorer is very fast and the keyboard on this huge screen requires two hands to type.

It would have been nice to add a one hand use mode like on the LG G2 and Galaxy Note 3. This is not just your regular Windows Phone 8 experience, since the handset runs Windows Phone 8 GDR Lumia Black version. This time the multitasking windows have an X in the corner, allowing us to close them and screen rotation can be locked. Other novelty brought by this software version includes a Driving Mode, Night Mode for Glance, refocus RAW shots, Bluetooth 4.0 LTE and the Story Teller apps, that works very much like Samsung’s Story Album, grouping pictures by location, date or event. 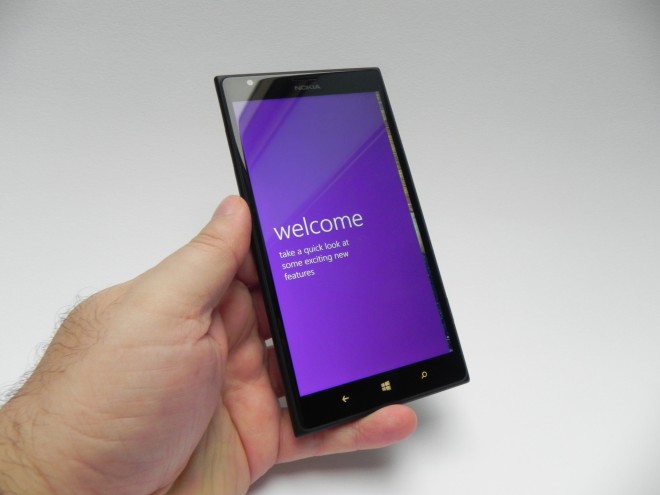 As far as phone calling goes, although the diagonal may not encourage you to use the handset for such purposes, it’s really a good phone, with very good call quality and good signal. We’ve got the usual quality in the apps area as well, with App Social offering you app suggestions, while the Bing Apps suite is also here, with pretty much the same package of apps as the Windows 8 experience. 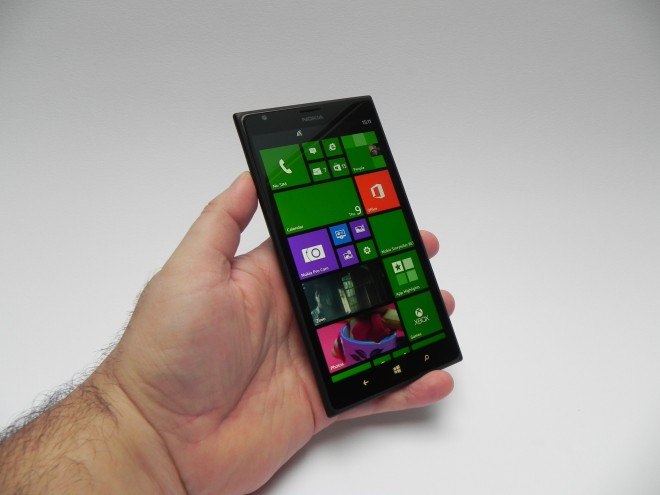 Next there’s Data Sense for managing your traffic and the HERE suite, that you already know and love. We’ve got Drive+ with lifetime voice guided navigation and a brand new find my car mode and Maps that has a lot of nifty landmarks and places included. There’s also Transit with the perfect routes to commute. Nokia Beamer is an evolution of the other Windows Phone Beam app, allowing you to also see what your camera is seeing on another device. There’s the usual Office experience here, so nothing has changed on the productivity side.

Finally there’s bundled Zinio for your magazine style reading needs. And now straight to the conclusions!

We give this device a 9 for design, a 9.2 out of 10 for hardware and a 9 for OS and UI. The final grade is 9.06 out of 10 for the Nokia Lumia 1520, the best phablet with Windows Phone that you can find on the market and a solid alternative to Android 6 inchers. You can find it on Amazon. 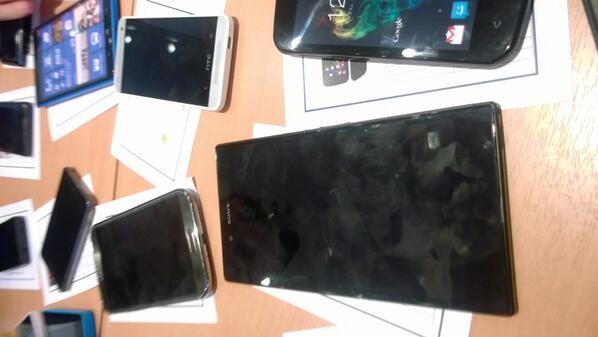 Nokia Lumia 1030 Phablet Gets Pictured in Blurry Shot, Next to...